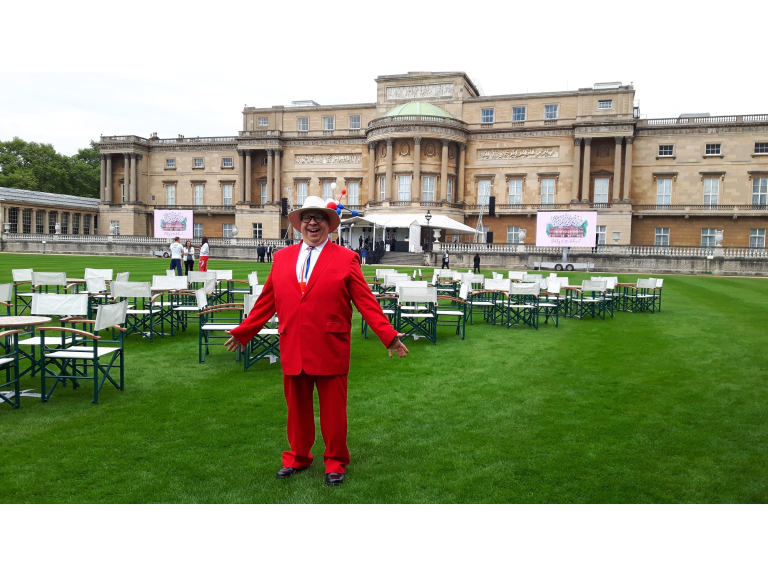 Earlier in the summer, local funny guy Danny The Idiot, was amongst a host of talented artists that provided the entertainment in the gardens of Buckingham Palace, for the inaugural party for children who had lost a parent in the military service to their country.

Security was, of course, understandably high, which Danny had to go through and was impressed by the mobile airport style luggage scanner. He had a laugh with the security people saying “My suitcase - it's just full of balloons” They laughed politely!

The Royal family opened their home to entertain 850 children with an accompanying parent or grandparent. The idea was for an informal child-friendly event to honour the kids and not have the usual pomp and formalities associated with these kinds of affairs.

Hosted by the young Royals, the Duke and Duchess of Cambridge and Prince Harry. In the words of Prince Harry “Buckingham Palace has not seen this much fun, ever.” They all had a go at flinging water balloons into the crowds! After the speeches Kate, Will and Harry came down on to the lawn to meet and greet the children and adults alike. They were absolutely mobbed! Chatting, shaking hands and even selfies! All in a day’s work for the young Royals.

In the brand-new marquees for the Queen’s Garden Party season Danny and his colleagues, the entertaining staff, were asked to help discourage sticky fingers from the shiny new marquee tent sides! There was a fine array of food for the children and other visitors that afterwards Danny and the other entertainment staff managed to grab some left overs back stage!

The grand finale saw the RAF Falcons display team parachute to land in the gardens. Impressive feats of stacking descending parachutists and landing in a small area had everyone with mouths wide open of appreciation, ending in cheers and applause from all.

Quite an experience for local, funny guy, Danny The Idiot. Need a different idea for your child’s party or a special Christmas or New Year’s Eve family event? Now, with Royal approval, Danny can make your special day go with a bang! Call him on 07947 013178.