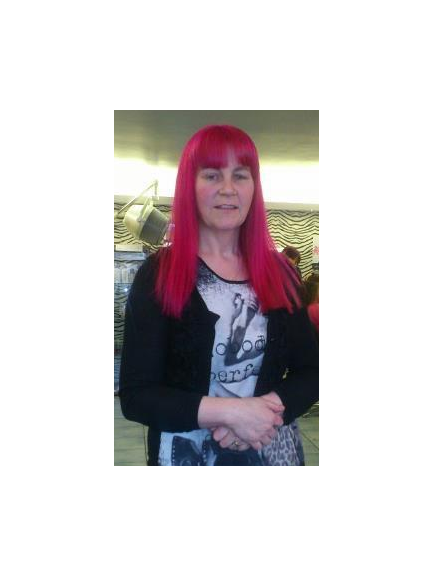 Landlady of the Jolly Carter, Angie Sutcliffe has dyed her hair pink to raise money for Ashlee Meecham who is suffering from terminal breast cancer. Ashlee was recently given the devastating news that she only had 18 months to live and now her dying wishes are to marry her fiancé, go on her dream honeymoon and go for days out and a weekend away with her 3 year old daughter.

Angie read about Ashlee’s situation in The Bolton News and was determined to help in any way she could. So Angie decided to dye her hair pink, the colour of Breast Cancer awareness. She said she had been getting some funny looks from people, mainly because of her age (she’s 52) but thinks it’s worth it if people take notice of why she’s done it.

Angie will keep her hair pink for 18 months, which is the time that doctors have given Ashlee to live. As it’s a permanent colour it will take that amount of time to grow out completely. Angie has said that she would keep the colour forever if it meant Ashlee would last forever.

This isn’t the only event Angie is doing to raise awareness. The Jolly Carter held a variety show on the 18th March. There was a pie and peas supper and a thrilling group of entertainers, who donated their time for free.

The Jolly Carter staff are joining in with the fundraising too. Some are colouring their head pink, some are dying their beard or moustache pink and head chef Paul Fox is having his chest hair coloured pink. A raffle is being held at The Jolly Carter too.

The final amount raised hasn't been counted up, but Angie believes they will have raised over £1,000 which will go towards Ashlee's dream wedding and honeymoon.

If you want to see Angie’s pink hair, and to donate to Ashlee’s Wish, contact the Jolly Carter on 01204 876693 or visit them in person in Little Lever.