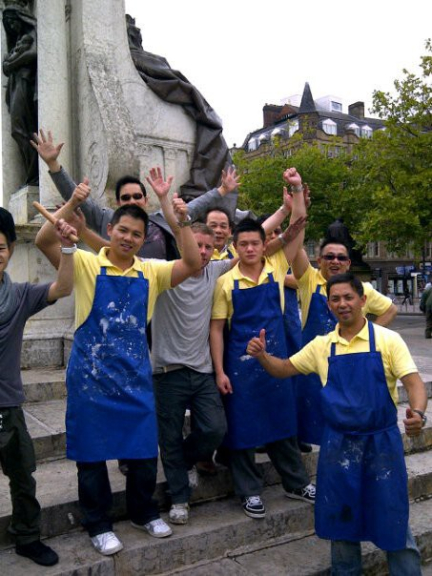 Two of Bolton's top Chinese restaurants go 'head to head' to make the biggest and best spring roll in a 24 hour SpringRollAthon!

Peter Wu and his team at THE Chinese Buffet in Bolton were selected to compete against Stephen Cheung and his team from The China Room at Westhoughton from over 100 restaurants who applied to the TV Show 'Monster Munchies' to feature on a new series for the Good Food Channel in the autumn.

The rules of the show were to make the BIGGEST and the TASTIEST Spring Roll within a strict time limit of 24 hours and the results were to be judged by a panel of 'experts' during the Manchester Picnic in Piccadilly Gardens Manchester on Saturday 6 August.

I spoke to Peter Wu, Managing Director of THE Chinese Buffet and 'thebestof bolton' member before the event and he was excited to have been shortlisted but taking the event very seriously, researching the best fillings and methods of cooking what was to be a huge Spring Roll.

The ingredients list was phenomenal, going to make a Spring Roll which would be 5 metres long and weighing upto 3/4's of a ton! Not just was it a mammoth task to make the thing in the restaurants kitchens and cook it in a purpose built oven but it then had to be transported to Piccadilly Gardens in Manchester, where the judges were waiting to sample the results and declare the winner.

I visited Peter in his kitchen at 4.00pm on Friday afternoon, 3 hours into the challenge and although there had been a couple of minor setbacks he was confident they would succeed.

The team continued through the night to create their spring roll and I didn't see them again until they arrived at Piccadilly Gardens on Saturday afternoon. I arrived at 12.30pm, 30 minutes before the deadline for judging and was dismayed to find that THE Chinese Buffet's Spring Roll was nowhere to be seen! Stephen Cheung and his team were already putting the finishing touches to their creation but after a little investigation it turned out THE Chinese buffet had been victims of their own success and due to the size of their Spring Roll were having technical difficulties making the transfere from the restaurant to Piccadilly Gardens.

Undeterred Peter and his men overcame their setbacks and made sure they got their edible 'Monster Munchie' spring roll into Manchester and into the judges tent, entertaining the crowds and making the TV program a huge success, even though their efforts were in vein, as they had missed the judges deadline!

I won't forget the sight of those yellow shirted men in their 'Team Blue' aprons wrestling with the 5 metre, 3/4 ton spring roll as it emerged from the back of the lorry on it's specially constructed roasting tin. Traffic and people stopped to watch the spectacle and the cameras kept on rolling.

The afternoon was a fantastic success for all concerned, congratulations to The China Room for taking the prize but well done also to Peter Wu and THE Chinese Buffet in Bolton for their Hurculean effort to make the show a success. Everyone was a winner in my eyes!