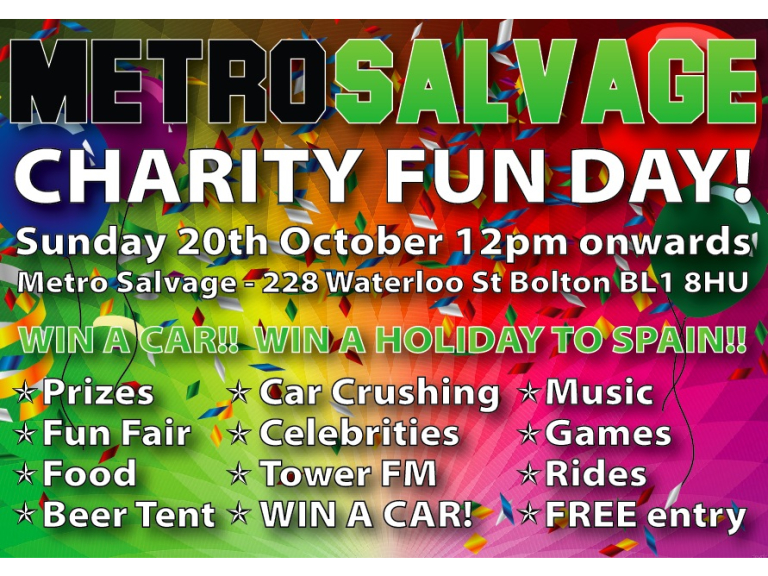 Metro Salvage, the town's favourite scrap yard - is hosting its very own Charity Fun Day in aid of The Kids of Bolton charity.

They've lined up something for everyone, including rides for the kids, £1000 in cash prizes, the chance to win a car, a beer tent and food!

But that's just for starters. It's also a chance to become part of history and witness them crush their ONE MILLIONTH CAR!!!

Since they opened their yard gates, some 20 odd years ago, they've been grabbing and smashing end-of-life vehicles with gusto - and giving their loyal customers the best pay-outs for the privilege.

On Sunday October 20th they want to thank them all by joining them in celebrating the squashing of their millionth car!

Their friends at Tower FM will be transmitting live from the Metro Yard, so there'll be music, fun and laughter as well a fascinating insight into the wonderful world of the scrap-car industry! It's recycling at its best! Metro Salvage boss Terry Walker said: "We never do things by halves at Metro, and that's why we're going the whole hog in celebrating such a milestone crushing! It's going to be an historic and memorable community event. So please come down, show your support and enjoy a great day out."

The action starts at 12 noon, with the big crush scheduled for 2pm

Hey I'm Ellie, I am an apprentice for thebestof Bolton. I love all things Bolton and I'm looking forward to working with our members.