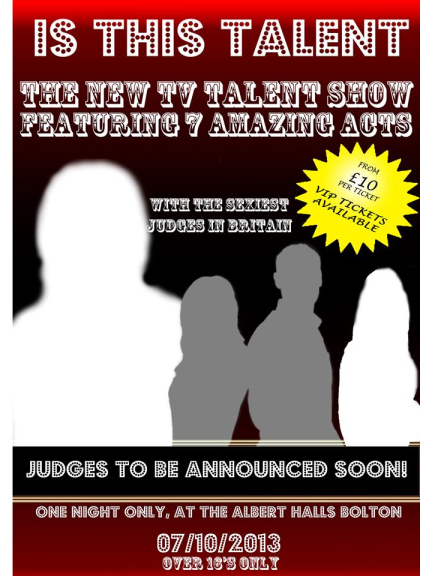 Bolton will have its very own talent show this autumn. On the 7th of October the very best talented individuals of Bolton and Bury will take to the stage at The Albert Halls for Is This Talent? and show off their special skill. It is only £10 for a standard ticket or £20 for a VIP ticket, and it’s going to be filmed live for TV, so you might even see yourself on the small screen too. It starts at 8pm and 7 acts will perform on the night.

Auditions for the show took place on the 7th July at the U Bar in Bury. A wide spectrum of acts were on show at this event.

The only criteria for entering the show was you had to be over 16. No restrictions were made on the type of talent on show, everyone was welcomed. Judges on the day were Sophie, Barry, Amy and Paul. However some new judges will be on the panel for the show in October, with Is This Talent’s Facebook teasing it will be the sexiest judging panel ever. Helen Flanagan, Rhian Sugden and Jodie Lundstram will be on the panel.

The plan is for the show to run on weekdays and be self-contained. The judges will alter every week, and a winner will be announced at the end of every show, rather than in a grand final.

Managers and creators Barry Barlow and Paul Alistair want the show to be completely different from Britain’s Got Talent and other variety shows already broadcast on TV.

For more information, visit the Is This Talent Facebook page at https://www.facebook.com/isthistalentbill or email isthistalent13@gmail.com.