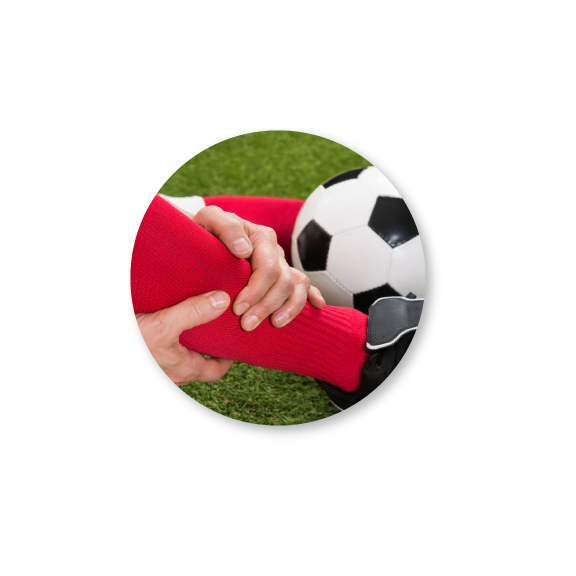 Everybody knows that Physiotherapists are regularly involved with football teams. They help players recover from injury. You might not be aware that Osteopaths also work in the football world. Most of the 'big' clubs have contact or a contract with an Osteopath or at least have done in the past. I have seen many local football players over the years and they don't choose Osteopathy or Physiotherapy; most of the time, players will see both. The players' preference determines the level of involvement of the Osteopath. Sometimes the head Physiotherapist will request input from an Osteopath. Including osteopathy as well as physiotherapy opens up more treatment possibilities for sportsmen and women.

Footballers are only humans underneath after all! The biggest difference is that they put bigger forces through their bodies. A premier league footballer will run around 10km in every game. That isn't constant movement but it can be very high strain. Football teams are often playing in multiple competitions, they can play more than once a week and that is a lot of running. Remember, players will train most days in the week too. Then, the faster a player runs, the higher the strain. The more minutes the player is on the pitch, the higher the risk of injury. Today's game requires stronger, fitter, faster players play to more football than ever before. A player involved in the sport today will put probably as much strain through their body in a 20 year career as you or I might do in 40 or 50 years. (No statistics, only an estimation.)

Often people think that osteopathy is 'all about the back'. We do a lot of work with people's backs, that is true but osteopaths treat the whole body. If it is human and it hurt's, we have a good chance at fixing it.

Osteopaths, we are experts in human bodies. We have a firm grounding in the mechanics of movement. We are also experts in understanding body chemistry; how different chemicals and hormones affect how the body works. For example, sprained ankle causes inflammation, this is painful and changes the way we move. The swelling takes up space, alters motion patterns and lowers the blod flow. Left alone, a sprain can lead to stiffness or permanently reduced function.

Another example, like a strained muscle in the upper thigh can cause you to twist your leg to avoid pain. This rotation can cause strain in a different joint to compensate. This often slows recovery. Because of osteopath's unique understanding and training in how the body works, we can provide valuable insight into the football world.

How does it Translate?

Treating top athletes, including football players, amplifies an osteopath's awareness and understanding. We see the effect of strain during peak performance which gives us a better understanding of everyday injuries.

As someone who does not do the same kind of exercise or training as a proffessional player, you can still benefit from our involvement in sports. The care and treatment you get as a non-athlete is the same as if you were aiming at the premier league title or for olympic gold. The same attention to detail, the same way of assessing your body, and most of the treatment has a similar style. It even costs is the same. So if you live a sedentary life, are involved in amateur sports or play professional football, you know you are in expert hands. The same hands that have kept some of our national heroes (and other international players) in the game.

Quick... book now before you suffer with that pain any longer.

Bolton Osteopathic are the pre-eminent healthcare musculoskeletal specialists in Bolton. Award-winning, professional and well established, with many years of experience, you know you’re in safe hands.
Male...