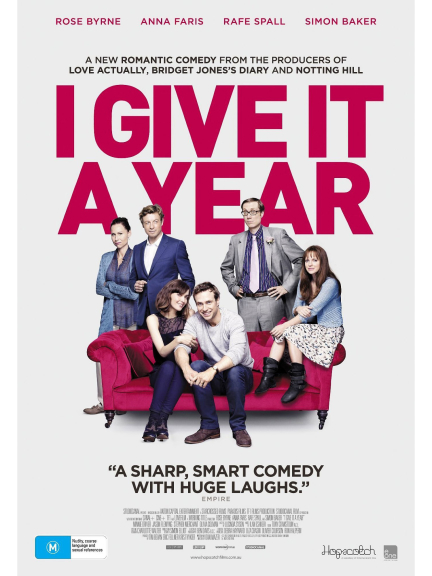 Last week, it was an American comedy. This week, it's the turn of the Brits, with 'I Give It A Year', a film in which two newly-weds struggle to make it to their first anniversary. And it can be watched at Cineworld, Bolton, right now.

Nat (Byrne) and Josh (Spall) have only known each other for seven months, but after a whirlwind romance in which everything has been idyllic, they find themselves in a church getting married.

It seems everyone feels it is too soon, including family and friends, with most betting it won't even last the year. But the happy couple are determined to make things work, thinking they know each other, and that marriage will be a breeze.

With distractions and temptation thrown at them from every angle, the cracks start to show immediately. Josh's ex girlfriend Chloe (Faris), from whom he never actually split up, is still quietly in love with him. And Nat's latest client is less subtle about things, declaring his feelings at every opportunity.

Battling against these feelings and each other, it seems Nat and Josh will never make it to that crucial first Anniversary,

Billed as the 'Best British Comedy in recent years', this film definitely delivers. Funny, witty and silly all in equal measure, this romantic comedy is easily more comedy than romantic, with an ending rivalling any other.

The cast is talented and produce an effortless performance, with nothing forced, making it an easy watch. There is very little wasted motion (perhaps giving it the edge over 'This Is 40). Anna Faris knows this genre perhaps better than anyone, and she shines once again.

But, stealing the show is definitely Mr. Merchant. Playing the obnoxious seems to come easily to him, and every moment he is on screen guarantees humour in abundance. Hugely successful with 'The Office', this should cement Merchant's successful transition to the big screen.

Perhaps the best thing about 'I Give It A Year' is it's plausibility as a film. There is an air of relatability to it, whether you see it in yourself or your partner; the awkward Christmas get-together, the inevitable toilet-seat trauma, the party panic when one of you gets more drunk than the other.

The writing is sensational. The script is fast-paced and allows a lot to happen in a relatively short film. The cast compliment the script, and the script helps the cast. It is certainly the funniest thing I have seen from a British production in recent years, perhaps ever.

And it edges out American 'This Is 40' in the Rom-Com stakes.