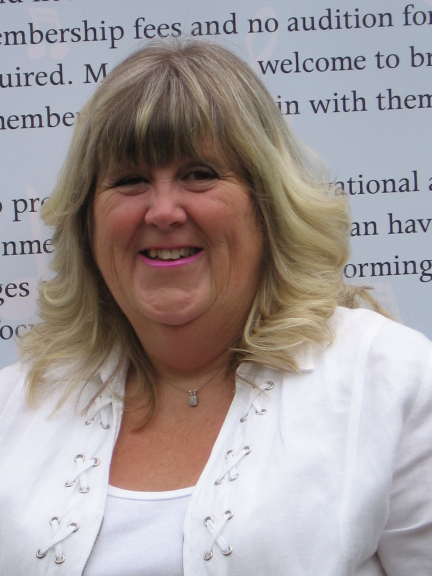 Karen Elliott - founder of Bolton Cancer Voices, from Bradshaw, has been nominated for the Positive Role Model Award at The 2014 National Diversity Awards.

The ceremony celebrates some of the excellent and inspiring achievements of positive role models and community organisations from across the UK. The awards aim to recognise nominees in their respective fields of diversity including age, disability, gender, race, faith, religion and sexual orientation.

It is a huge privilege and very humbling to have been nominated for this award. Whilst winning such a prestigious award is beyond my dreams, this is a fabulous opportunity to put Bolton Cancer Voices on a national stage and hopefully inspire others to consider such a venture or realize the potential within themselves.

Bolton Cancer Voices is the only dedicated Choir for cancer patients and cancer survivors within the North West, with a current membership of 40+. There are no less than 14 individual tumour types represented in the Choir with a third of our members joining within 12 months of receiving their diagnosis; the shortest period being 2 weeks post diagnosis and the longest 55 years! Though cancer brings the Choir together it doesn’t define who we are or what we do: Bolton Cancer Voices is a Choir like any other with a full, varied and challenging programme of performances and activities that already runs in to 2015.

When people receive a cancer diagnosis it can feel that life is spinning out of control and even after treatment is complete the consequences may continue to be felt. Singing can be powerful, empowering and energizing and I believe it can play a role in helping boost confidence and self-esteem – both of which some find to be undermined when they receive a cancer diagnosis. From the outset I was very clear that the Choir should provide a positive, motivational and diversionary environment in which members can have fun, enjoy the challenges and exhilaration of performing and have a focus aside from their illness: also that it should offer an informal forum to meet with others in a similar situation and benefit from mutual support and understanding; accordingly we have a half-hour before the start of rehearsal in which members can have a brew and a catch-up. People appreciate this opportunity to meet with others who have received a cancer diagnosis in an informal forum that affords an environment of acceptance and understanding and in which they feel there’s no need for pretence nor necessity to avoid certain topics that might not easily be discussed elsewhere.

To ensure the Choir is accessible to all no singing experience is necessary; you don’t need to be able to read music; there are no auditions and no fees to worry about. The Choir accepts people from any geographical area as long as they can get to the centre of Bolton for rehearsals.

Like so many organizations the Choir was founded on nothing but a dream, eternal optimism and a wealth of goodwill!

At the end of June the Choir will be 2-years old and going from strength to strength: not only are members gaining a lot of enjoyment from the Choir but in a recent Survey many reported that they feel they gain benefits physically, mentally or emotionally from their membership, which is fantastic.

I might be the founder of Bolton Cancer Voices and the person who runs everything behind the scenes but the Choir’s success is down to our dedicated and talented musical team – Musical Director and Accompanist; our hard-working Treasurer who shares the burden of ensuring we have the money to run and develop the Choir and key to the whole thing – our wonderful inspirational members, who fill rehearsals with their song and laughter and show the world that cancer needn’t be a barrier to living life to the full!

Perhaps they should have the last word on the subject: -

Brian says: -‘Singing is a way out of a problem, it softens my worries, it calms me down. When I’m singing I’m on a high, it’s an escape from the real world. It helps control the pain I suffer; I really don’t know what I would be like without it. The Choir members are like an extended family; we all get on well and support each other when times are bad.’

Kath says: - ‘Bolton Cancer Voices has had a wonderful impact on my recovery – I am 4 years post-diagnosis and singing always lifts my spirits and makes me feel so much better.’

Margaret says: - ‘I was diagnosed with breast cancer in June 2013 and my life changed dramatically. I went along to rehearsal and felt at home immediately; now I had a purpose in life and a roomful of new friends.’

Pat says: - ‘Having the Choir has given me a totally new perspective to my life at a time of great personal challenges. Singing is a great way to lift spirits; I can walk in feeling tired, perhaps after having had treatment, but the atmosphere, the people and the singing just give me the biggest buzz possible.’

Lynne says: - ‘The Choir has added 100% to my quality of life since cancer; music works wonders!’

Over the last 8-9 years founding Bolton Cancer Voices has been just one element of the cancer associated voluntary work I’ve undertaken: - other activities have included a pivotal role in campaigning for a local Cancer Information and Support Centre in Bolton; running a Facebook page - to help people try and find local and national sources of cancer related information or support and as a Ward Volunteer at the local Hospice.’

The National Diversity Awards 2014 in association with Microsoft will be held at The Hurlingham Club, London on September 26th. Britain’s most inspirational and selfless people will come together to honour the rich tapestry of our nation, recognising individuals and groups from grass roots communities who have contributed to creating a more diverse and inclusive society.

The largest diversity awards ceremony of its kind has attracted a growing list of top employers such as Sky, Financial Ombudsman Service and Price Waterhouse Coopers.

The prestigious black-tie event has also gained support from a number of celebrities including Stephen Fry, Misha B and Ade Adepitan.

Amongst last year’s winners was James Partridge, who spear-headed campaigns for social change and pushed for anti-discrimination protection. Jessica Huie took home the entrepreneur of excellence award for race, faith & religion, for setting up the UK’s most successful multicultural Greeting Card and Gift Company. Birmingham LGBT were also recognised for opening the first LGBT Health & Wellbeing Centre in England and Wales.

Paul Sesay, Chief Executive of The National Diversity Awards said, ‘It is an honour to witness the extraordinary journeys of Britain’s unsung diversity heroes, and we will continue to recognise their extraordinary achievements during 2014.

I know another fantastic spectacle of role models will be delivered and recognised this year’.

Nominations are now open and close July 18th 2014 - so don’t miss out on your chance to get involved! Shortlisted nominees will be announced shortly after this date. Judges will be awarding each nominee a certain amount of merits for the following: - quantity of nominations received for that particular nominee; quality of the nominations received for that particular nominee; how strongly their work relates to the award category they have been nominated for and evidence provided by the nominee themselves.