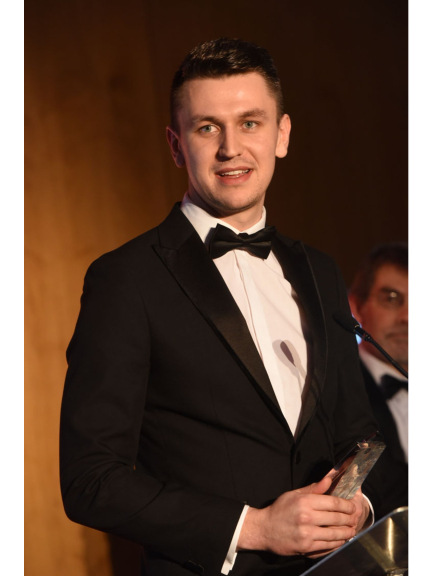 William Hare Group Apprentice David Thomas, who undertakes his training with Bolton based Training Provider Alliance Learning, has been named, ‘GTA England Engineering Apprentice of the Year’ at the 2019 GTA England Apprentice Awards. The event took place on 7th February at the Manufacturing Technology Campus in Coventry.

David’s training Provider, Alliance Learning, is one of the North West’s largest Independent Training Providers and has been delivering Apprenticeships and training since 1966.

The award was presented by Sir Gerry Berragan – CEO of the Institute for Apprenticeships.

Mark Maudsley, CEO of GTA England commented, “We were delighted to hold our awards at a member’s prestigious venue.  This allowed us to showcase the work of Group Training Associations.If employers and our members are the crown of GTA England; then the Apprentices are our jewels.”

Receiving the award, David said, “Winning the GTA apprentice of the year award, shows that all my hard work over the last 4 years and throughout my apprenticeship has been recognised and paid off.”

Ceri Travers, who is Learning & Development Manager at William Hare Group had the following comments: “Everyone at William Hare is delighted for David and his success at the GTA awards. He is a shining example of what young people can achieve through an apprenticeship programme. His hard work, professional and can-do attitude will take him far in his career. With the support of his tutor at Alliance Learning, his mentors and colleagues at William Hare, he has been able to tackle high profile jobs and work well beyond what is expected at such a young age.”

Kelly Perkin, Chief Executive at Alliance Learning, had the following comments: “We are absolutely delighted that David has won this National Award, his commitment to his qualifications, supported by our fantastic team at Alliance Learning really shines through. I am sure he will continue to prosper in his future career in engineering at William Hare Group.”

Shabaaz Khan from Premex Group was also Highly Commended at the event in the business services category. This was due to his high performance within his day to day work. Shabaaz was instrumental in creating a new role within the organisation to deal with administrative duties. The introduction of the credit control administrator role freed up time for other team members to concentrate on the core duties and contributed greatly to the team spirit and motivation.

More information about Alliance Learning can be found on its website – www.alliancelearning.com – or by calling 01204 677888.

More information about GTA England can be found by visiting www.gta-england.co.uk.

Over 50 Apprenticeship Vacancies Available Now at Alliance Learning For GCSE / A-Level Students who want to Fast Track their Career!