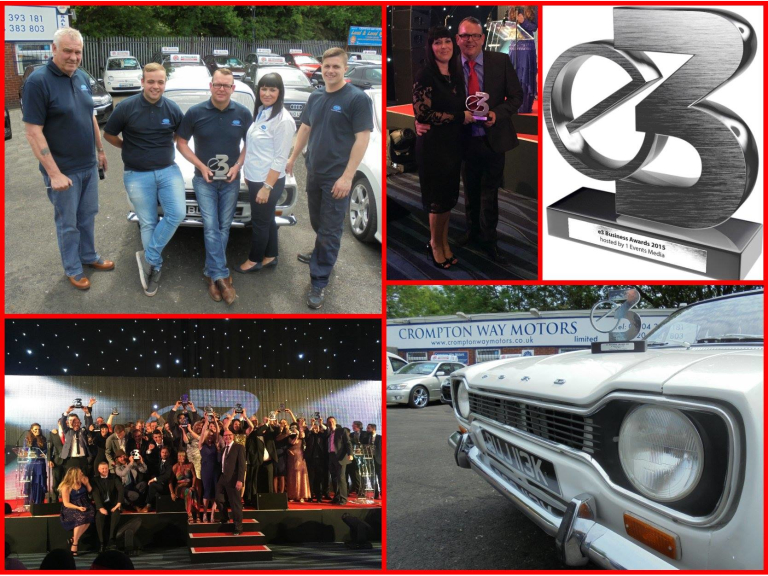 Bolton based used car dealership, Crompton Way Motors has been named “Customer Service of the Year” at the 2015 E3 Business Awards, which were held on 11th June at the Macron Stadium in Bolton.

The company which buys and sells used cars from their premises on Crompton Way and who are also members of thebestof Bolton faced intense competition from companies across the North West. The award was presented by Zuber Patel representing the award partner Tile Mart.

Receiving the award was Paul Richards from Crompton Way Motors.

Speaking on behalf of 1 Events Media, which hosted and organised the awards, Managing Director Mubarak Chati said: “Many congratulations to Crompton Way Motors, which took the title despite the strongest field of competitors that the E3 Awards have ever seen. The judges interviewed all the nominees and have said repeatedly that 2015 has been a truly exceptional year.

“Across all the categories, we saw businesses and individual entrepreneurs who have displayed vision, determination and energy. There is a lot of genuinely exciting talent in the North West business community, and all the finalists have made an important contribution to the regional economy. Crompton Way Motors is a great example of that and I’m delighted to share in celebrating its success.”

More information about Crompton Way Motors can be found on their website – or by calling 01204393181.

More information about the E3 Business Awards, including a full list of winners, can be found here www.e3businessawards.co.uk

Over 50 Apprenticeship Vacancies Available Now at Alliance Learning For GCSE / A-Level Students who want to Fast Track their Career!