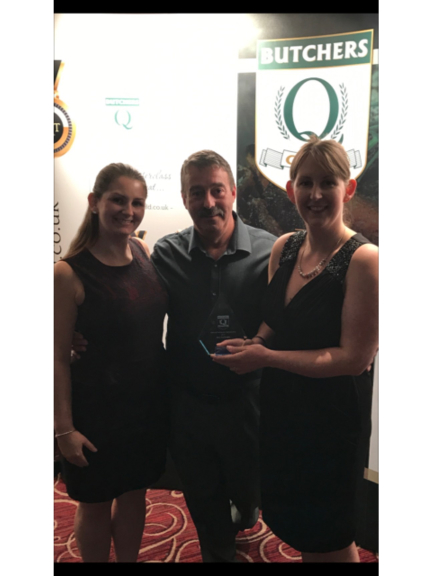 Local business, Frasers Butchers  has been made a national champion at the 2017 Q Guild of Butchers annual BBQ Award for their outstanding burgers.

The competition, which took place yesterday at Eastwood Hall in Nottinghamshire, saw Frasers walk away with the prize for best burger. They beat off other butchers from across the country to take the prize at the awards dinner last night.

The judges, which included David Hughes from UK BBQ Magazine, said of the winning product:

“It was a very close run thing indeed in the burger category, but this one was the perfect thickness for BBQing, it had a good ratio of meat to fat giving it a soft taste but retaining a really good meaty flavour. And it looked great both raw and cooked.”

Winning butcher, Greg Hull, was delighted with the award:

“The secret to our winning burger is the really good quality meat that goes into it; we use flank and chuck which we think is an excellent combination - and our customers think so too!”

The BBQ Awards are held annually and are open to any of the 100 plus members of the Q Guild of Butchers throughout the UK. The seven regional heats, which took place in March, April and early May covering Scotland, Wales, South, North East, North West, East and Midlands, each delivered one winner for the national finals. The six BBQ product categories were steak (prepared using only salt and pepper, traditional sausage, burger, speciality sausage, speciality burger and speciality BBQ product.

Frasers Butcher’s winning burgers as well as a variety of other products for the BBQ are available from their shop at 272 Rishton Lane, Bolton, BL3 2EH.