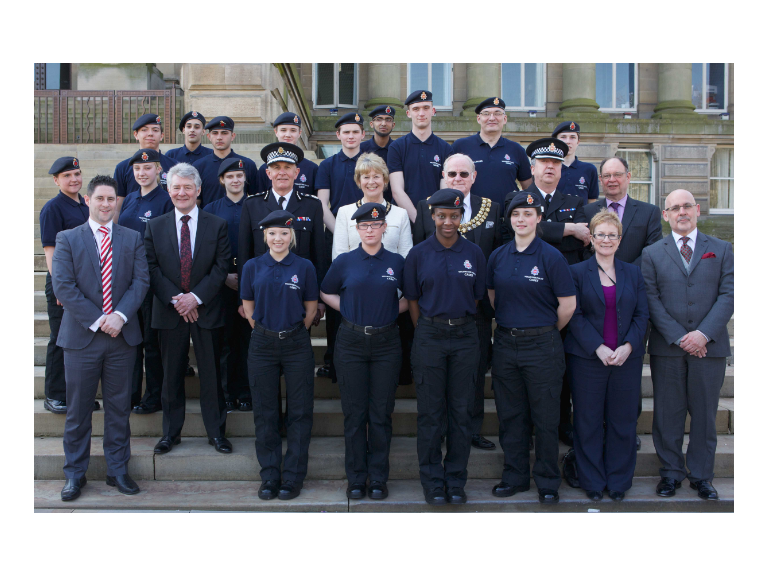 On Tuesday 15th April, the Principal of Bolton College joined the Chief Constable for Greater Manchester Police and the Mayor of Bolton for the Passing Out Parade.

The reason for the parade, which took place both inside and outside Bolton Town Hall, was to celebrate the Volunteer Police Cadets' successful completion of their eight-week probationary period in the Greater Manchester Police Voluntary Cadet Scheme.

The Scheme is the inaugural Bolton Police Cadet programme; other Cadet programmes have been run elsewhere, but this is the first to involve young people from the Bolton area. The group of Cadets meets once a week at Bolton College; approximately half are Public Services students from Bolton College and the remaining half are from other local schools.

Tim Woodward, Public Services and Police Studies Lecturer at Bolton College and Team Leader for the GMP Voluntary Cadet Scheme, said: "We at Bolton College are delighted with the achievements of the GMP Volunteer Cadets. Each Cadet has contributed individually to the success of the programme and the securing of potential police recruits for years to come."

Also among the proud onlookers were the Crime Commissioner for Greater Manchester Police, the Deputy Chief Constable and Bolton College's Chair of Governors.

Marie Gilluley, Principal of Bolton College, commented: "It's great to celebrate those young people who have progressed through the Cadet Scheme via the College with the support and guidance of all of the Team Leaders involved."

In addition to their desire to give back to the community, the Bolton College students chose to enrol on the Scheme because it will potentially better their chances of gaining employment in the police force.

PC Michael Jennings-Whorton, Bolton Police Cadets Co-ordinator, said: "I'm extremely proud of the 27 Volunteer Cadets in Bolton; their confidence has soared since joining the Scheme and they have now been properly welcomed into the police family. Two of them have even applied to join the Service - one has become a Police Community Support Officer and the other an apprentice Operational Support Officer.

Abubakr Saddique, the apprentice Operational Support Officer, said: "I joined the Cadets because I've always wanted to become a Police Officer and I thought that volunteering would help me to achieve that dream - and it has! I've been really looking forward to the parade; we all enjoy representing Greater Manchester Police."

Bolton College
Why not check out this Schools and Colleges business in Bolton. Bolton College is a 'thebestof' business member.
Latest Articles