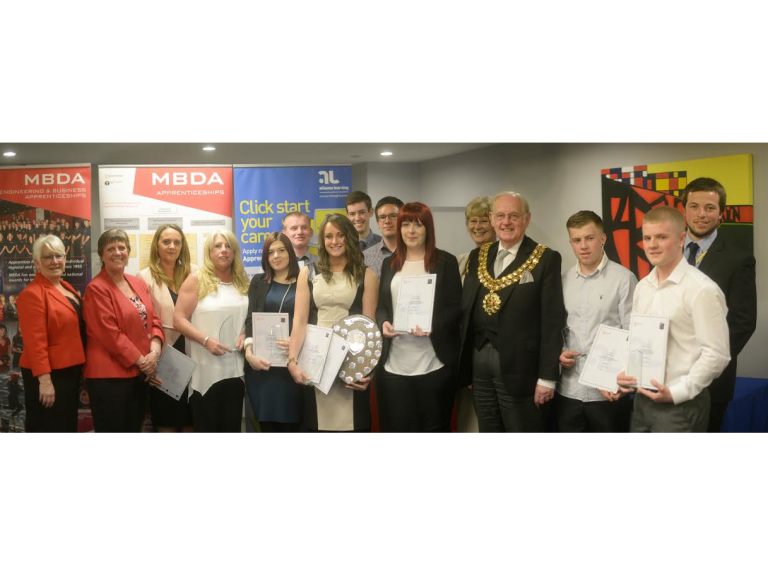 Alliance Learning, one of the North West’s largest independent training providers, celebrated its 22nd Annual Awards evening on the 22nd May. Hosted for the first time by Alliance Learning new Chief Executive, Julie Robinson, the event took place at the MBDA head office in Lostock, Bolton.

Third time sponsors of the event, MBDA, world leader in missiles and missile systems, were proud to provide this superb opportunity to recognise the outstanding achievements of North West apprentices and business course learners across the board.

There were over 100 guests in attendance, including MP Julie Hilling, the Mayor and Mayoress of Bolton, the Alliance Learning Board, the best of Bolton representatives, Alliance Learning staff, the proud winners themselves and their guests and employers.

Alliance Learning CEO, Julie Robinson, acknowledged the difficultly the judges had in selecting just a handful of winners across the various categories saying, “The individual awards are based on performance, attitude, conduct, effort and application. Winners have been selected by nominations from Alliance Learning staff. We currently have over

500 learners on our various training programmes, so you can imagine it has been a difficult, however, enjoyable process to select the winners from the various categories.”

There were also two additional awards, Company of the Year for Training & Development and Employee of the Year Award, both nominated by Alliance staff.

The highlight of the evening was the highly coveted Overall Apprentice of the Year Award, which was given to the learner who has shown exceptional commitment to their training programme and has gone above and beyond what is expected of an apprentice.

Other award winners on the night included:

Health & Social Apprentice Award
Awarded to Stacey Nowell, 27, who works as who works as a Support Worker at Belong in Atherton. Stacey has completed her Apprenticeship in Health & Social Care including NVQ Technical Certificate and Key Skills and has now moved onto a college course with her ultimate aim to become a nurse.

Technical Engineering Apprentice Award
Awarded to 21 year old Jade Aspinall, who works for MBDA UK Ltd and has completed her Apprenticeship in Performing Engineering Operations, and is now working to complete her NVQ level 3 and also her HND.

Progression Award
Awarded to 20 year old Philip Rothwell, an apprentice at MBDA UK Ltd. Phil is currently working towards his extended diploma in electrical and electronic engineering as well his HND.

The award was presented to Berkeley House, a care home in Pemberton, Wigan. Over the past year Berkerley House have recruited around 18 Apprentices in partnership with Alliance Learning covering both Level 2 and Level 3 frameworks. In addition, they have also enrolled 39 members of their staff onto a range of Alliance Learning European Social Fund courses to develop their staff skills further.

The overall winner of this award was Ashley Swift From Manchester. Ashley was hailed by colleagues as being dependable, efficient, polite and friendly.” Julie Robinson described Ashley as, “Committed to his role and to the company, and someone who always tries to lifts spirits of those around; projecting a warm, cheerful attitude to both customers and colleagues.”

Of the organisation she leads, Julie said, “We are extremely proud of the contribution that Alliance Learning has made to the development of skills across the Greater Manchester and Lancashire area for the past 48 years.

In July 2013 we were inspected by OFSTED and improved our grade from satisfactory, now classed by the government as requiring improvement, to Good. Not only is this a major achievement on the part of the staff, but it demonstrates our quality to learners, customers and awarding and funding bodies.

Most importantly this sets us in a select band of training providers who are well regarded to drive quality and also places us in a position to offer new qualifications to meet skills priorities in our local areas. “

A raffle was held on the night with the £246 raised being split between two deserving charities, The Bolton Hospice and Derian House Children’s’ Hospice