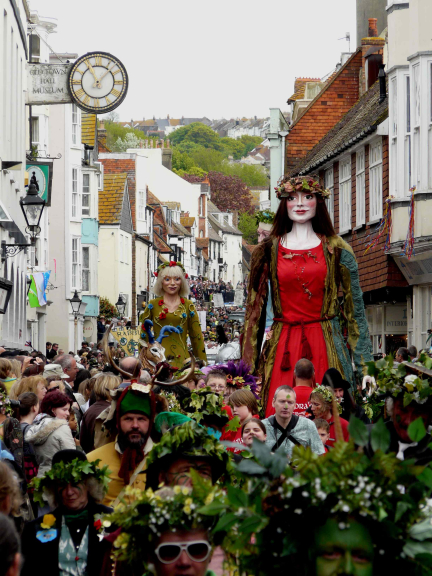 In this wonderful seaside town of Hastings we are renowned for our many festivals, not least Jack-in-the-Green with the advent of Summer at the end of April and beginning of May - lighter mornings and lighter evenings mean Jack-in-the-Green! But how did this tradition begin?

Jack-in-the-Green is believed to have begun during the 16th and 17th century celebrations of May Day. People used to compete with each other by making elaborate garlands. In the 18th century there were a number of competitions to make garlands and one of them became so big that it covered an entire man who was known as Jack-in-the-Green.

There were two groups within Hastings who paraded a Jack-in-the-Green until 1889. By the turn of the century, the tradition had died out and this was seen no more. This was for couple of reasons; first there was an act that stopped boys from climbing chimneys and they were the main performers and secondly, the Victorians had a different attitude to this custom. The custom was changed by having no more giant maypoles with drunken and promiscuous behaviour; instead these were replaced by small poles that was imported from Germany with happy skipping children around them. Instead of having a Lord and Lady of the May with their practical joking they were replaced by the May Queen. This set the tone that there was no place for the drunken noise of Jack-in-the-Green. The event was revived in Hastings by Mad Jack’s Morris Dancers in 1983. Today they say Jack has returned but it is no longer the property of a small group of dancers but belongs to us all!

So, now you know about the history, make sure you're around over the Bank Holiday weekend - Fri 28th April - Mon 1st May, and enjoy the amazing Jack-in-the-Green festivities... More information can be found on the website here