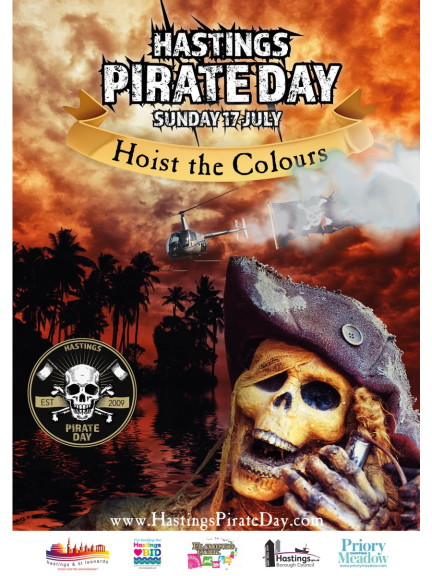 Strange but true… venture down to the Stade area, Pelham beach or maybe the newly opened Hastings pier on Sunday 17 July, and if you’re NOT dressed as a pirate you’re likely to stand out in the crowd!

Back by popular demand, this year’s Pirate Day is going to be bigger and better than ever. Not by chance for sure – I enjoyed a coffee recently in the town with the founder of this great Hastings day out, Roger Crouch. You can’t fail to be enthused just listening to Roger’s desire to give Hastings’ people a day to remember!

The inaugural Pirate Day was back in 2009 before smashing the then World Record for the number of pirates in a single place, the following year in 2010. The record to beat at the time was 1,800, which was surpassed with ease as the count was finalised at 6,166. The following year, the good people of Penzance took the record from Hastings with a count in the region of 8,000 before the World Record was reclaimed by Hastings in 2012. A World Record of 14,242 was set that day in the build up to the London Olympics, which stands to this day!

The following year in 2013, saw the introduction of Pirate Skyfall before a couple of lower key years bringing us up to date.

The theme in 2016 is ‘Hoist the Colours’ – there is official merchandise to purchase to get you in the mood! And a big part of this year’s Pirate Day are the activities on the pier. Families will be able to enjoy Pirate themed entertainment, a Pirate circus workshop and swash buckling stunt action!

The highlight of the afternoon will surely be the Pirate stunt helicopter show adjacent to Pelham beach.

So, will the four year old World Record be broken this year? Roger conservatively believes that some 20,000 Pirates will descend on Hastings on Sunday 17 July for a whole host of entertainment for all the family…