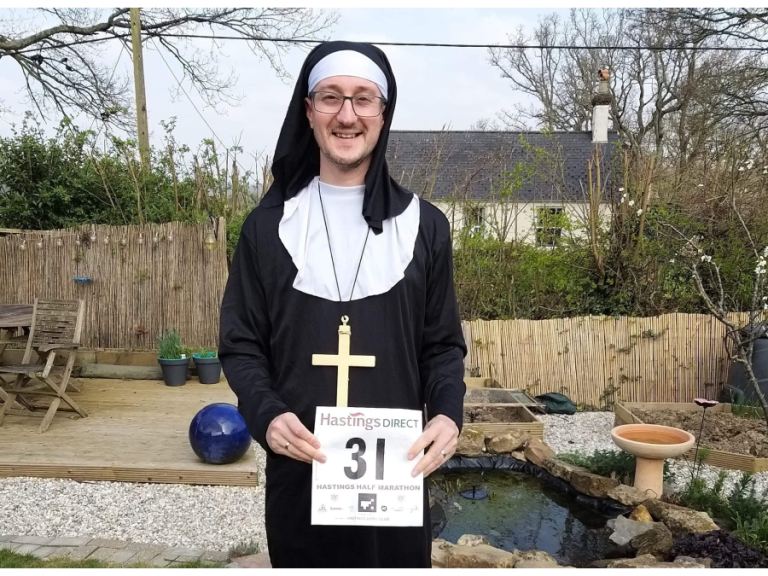 There isn't much for us to get excited about at the moment. So when you see one of your colleagues running the Hastings Half Marathon, on a treadmill in his lounge, dressed as a nun, you can’t help but smile and feel proud.

These are the heartwarming stories we need right now.

Inclusive Pathways lecturer, Dan Stratford, was somewhat disappointed when this year’s Hastings Half Marathon was postponed. Dan, who works at our Ore Valley campus in Hastings, was not about to be put down while on lockdown, so came up with an inventive way to complete the 13.1-mile race and raise money for local Hastings and Rother charity, St Michael’s Hospice.

“Like most runners who take part each year, I was really sad when I heard the half had been postponed,” said Dan. “I completely understood, given the circumstances, but I was determined to run, raise money and awareness for the hospice and have a bit of fun.

“The original plan was to run it on my treadmill in the garden, however, due to the weather forecast, we decided to move indoors. I have run the previous five half marathons and worn fancy dress each year so wanted to continue that tradition and donned my nun’s gown to have a bit of fun - which was just as well because I didn't train this year!

“St Michael’s Hospice is a charity that is close to my heart and I also wanted to show my support for all the key workers out there doing an amazing job right now.

“It was really surreal running on the treadmill. It was a different beast compared to running outside on the road. I didn’t have the crowds lining the street to push me on so I imagined familiar points around the course and used them as milestones. It wasn’t about the time, I didn’t care about that, it was all about finishing the race and raising as much money as I could for the hospice.

Dan and his family live-streamed the half marathon on Facebook and received an incredible amount of support.

“I was touched and overwhelmed with the support I had before, during and after the run. I even had people I’d never met commenting and wishing me well and that’s just incredible. I’d like to say a real heartfelt thank you to everyone who supported and gave generously. The donations are vital for the hospice, especially during these current challenges.”

If you missed Dan’s run and would like something to lift your spirits, the video is well worth a watch. It’ll be the best 7 minutes of your day! Head to escg.ac.uk to see it.

On the day, Dan was able to raise over £400. You can show your support to Dan and the Hospice by making a donation. Use the donate button on the St Michael’s Hospice website to pledge.

East Sussex College (ESC) is one of the biggest Further Education colleges in the South East. ESC was born in March 2018, when Sussex Coast College Hastings merged with Sussex Downs College to create the...