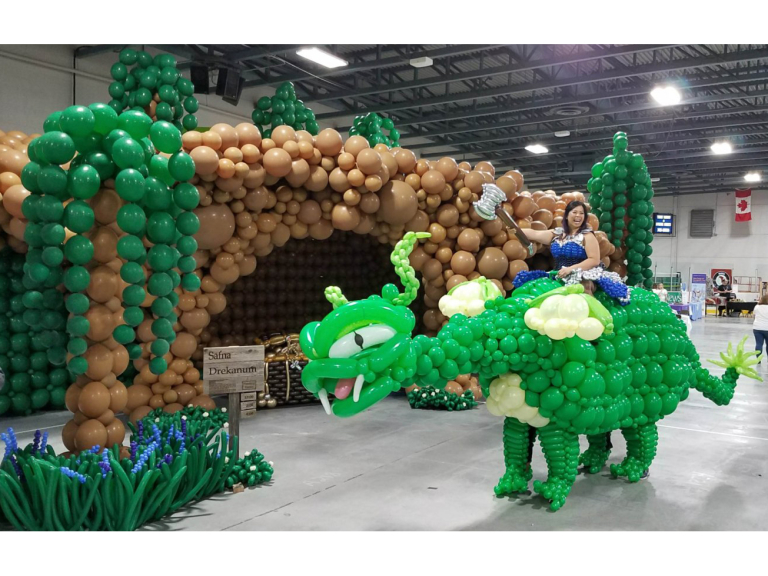 Recently I was asked to go to Canada because of my directing, performing and balloon skills. Yes – you read it right! My friend Drew Ripley (www.drewripley.com) in Kitchener, Ontario had an idea for a balloon project larger than he could accomplish on his own. So he called in several friends to help with “Baldur’s Balloon Cave”. About 17 people from Canada, USA, Ireland and UK built a huge balloon cave, trees, flowers and treasure chest as a backdrop to Baldur the Balloon Dragon. Drew’s idea was to build all this at Maker’s Expo 2018 in Kitchener where crafts people mixing science, art and making meet and show what they do for the public. The kicker in this project was that Baldur the Dragon was to have to puppeteers inside the dragon so the beast can wake up, do tricks and then as the grand finale, have a dragon trainer (in a balloon dress, of course!) ride the dragon a few steps. We didn’t know if this was possible or not until we actually tried it out. But it did! The whole project was well received and people absolutely loved all elements of the performance, the balloon cave and of course Baldur the Balloon Dragon. 21,000 balloons were used, sponsored by Pioneer Balloons Canada. Balloons can take you far, even on a Dragon!

If you would like to see how I can help you on a small balloon adventure, please contact me at www.DannytheIdiot.com