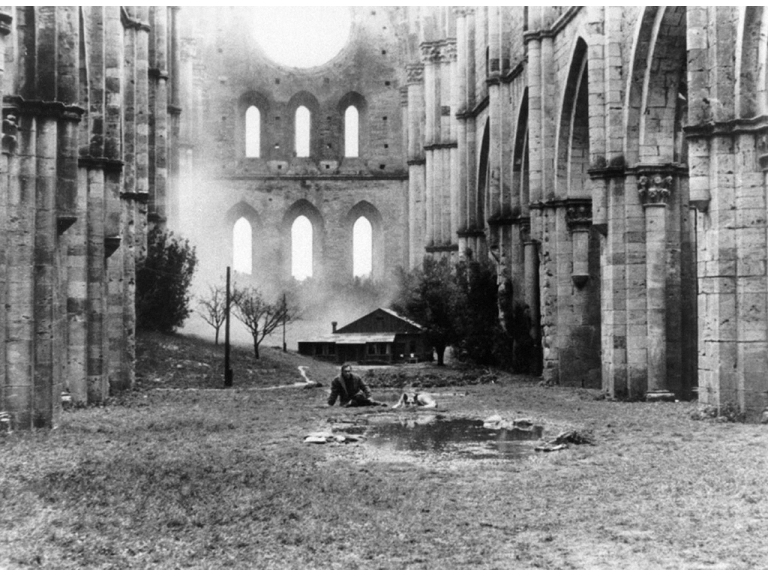 Often considered to be Tarkovsky's masterpiece, The Mirror, blends the themes of childhood memories, dreams, emotional abandonment and loss of innocence with devastating archival footage of Red Army troops arduously trudging through mud, allowing these recollections to reverberate within Russia’s tumultuous national history. It is a loosely autobiographical, unconventionally structured film that incorporates poems composed and read by the director's father, Arseny Tarkovsky. An inspired and sublime meditation on time and memory.

Andrei Tarkovsky’s unforgettably haunting film, his first to be made outside Russia, explores the melancholy of the expatriate through the film’s protagonist, Gorchakov, a Russian poet researching in Italy. Arriving at a Tuscan village spa with Eugenia, his beautiful Italian interpreter, Gorchakov is visited by memories of Russia and of his wife and children, and he encounters the local mystic who sets him a challenging task.

Nostalgia is filled with a series of mysterious and extraordinary images, all of which coalesce into a miraculous whole in the film’s final shot. As in all Tarkovsky’s films, nature, the elements of fire and water, music, painting and poetry all play a major role.

I am an artist living in St Leonards. I work at Kino-Teatr, independent cinema and arts centre, as part of the marketing and social media team.

What do you value the most?

Using Facebook Messenger Chat Bots for your Business
Sign up for offers
Sign up for what's on guide
Become an author
Popular Categories
By clicking 'ACCEPT', you agree to the storing of cookies on your device to enhance site navigation, analyse site usage, and assist in our marketing efforts.
For more information on how we use cookies, please see our Cookie Policy.