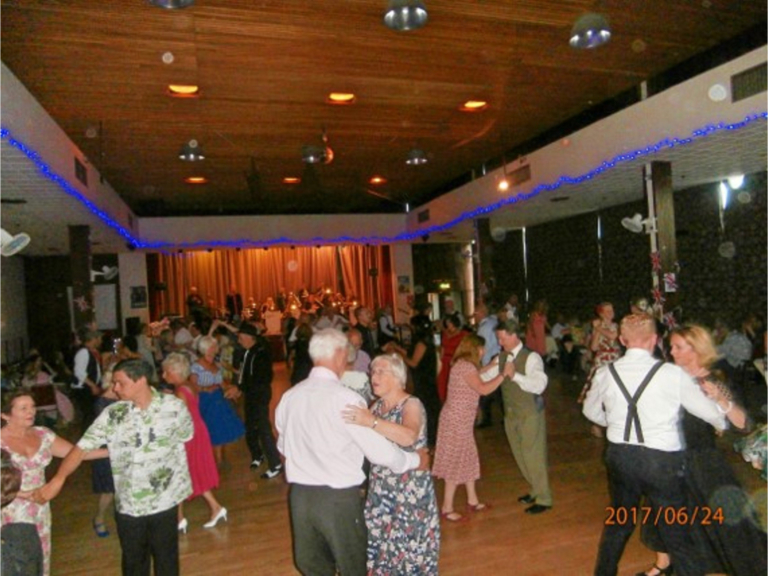 The Big Band Charity Dance for “Upbeat” Heart Support for West Suffolk patients and their families was a great success. The event was themed to the 1940’s with music covering the 30s, 40s and 50s. The evening commenced at 7:30 with a ½ hour of music and sounds of the 1940’s played by our DJ “Snake Hips Steve” with a projection of still images of the period being shown on a large screen behind a simulation of a juke box. Then right on queue the Air Raid warning and the All Clear sirens sounded for the start of the music by “Swing Machine” a 17 piece big band from Ipswich lead by Bob Airzee with sounds of Glenn Miller, Frank Sinatra, Ella Fitzgerald and many others.

Dancing the Waltz, Quickstep, Rumba and Cha Cha to a big band is something special.  Swing Jiving is typical of the 1940’s and many of the attendees dressed in the styles of the period. The evening was a great success and raised £700 for the “Upbeat” Charity.

The event was organised by “Dance With Us Suffolk” run by Philip and Jacqui Goodyer from Leavenheath, who would like to say a special thank you to the Sudbury Tourist Office for helping to sell the tickets.  The “Swing Machine” will be returning to the Delphi Centre on Saturday 30thDecember for an end of year ART DECO themed Sparkle Party Night. Tickets will be available soon