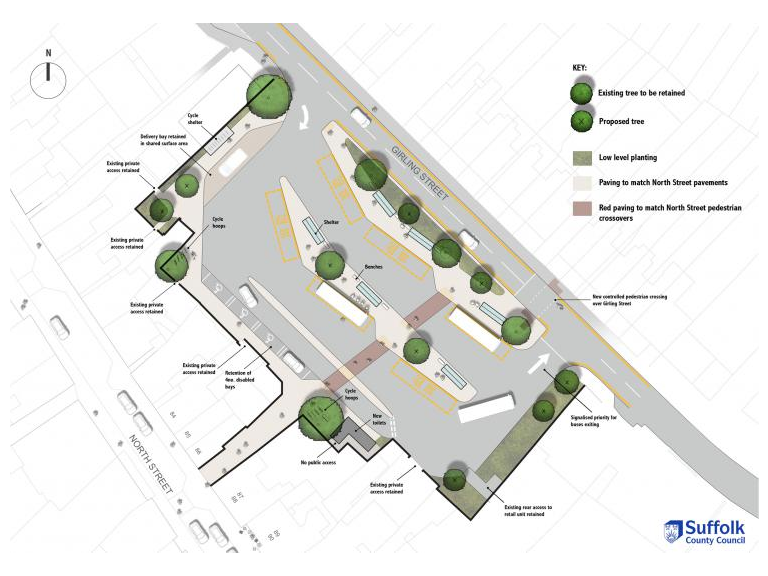 As part of a five million plan to regenerate areas of Sudbury, - it has been proposed that the Sudbury bus station be moved. These plans have become quite controversial and have now reached the stage of public consultation. Thomas Gainsborough School Sixth Former, Alex Nightingale has been looking in the plans.

The proposed plans for the Bus station are for it to be relocated from Hamilton Road, where it currently resides, to the Girling Street car park.

I can immediately see two advantages; As young person who cannot drive, but frequently uses buses, I think it Girling street is a prime location.

I contacted District Councillor and local business owner, Lee Parker, who stated that “The proposed move to Girling Street is the best in my opinion … It will bring people right into the heart of the town”.

The proposed relocation is up the ‘business end’ of Sudbury! I can also see it making a difference for elderly residents who count on the buses to make it into town. It is closer to some of the primary shops and provides more centralised access to the town centre (not by much however).

Although it does leave one burning question: what to do with the old bus station? Mr Parker had stated that “Sudbury has a lot to offer. It’s mixture of historical buildings, nestling within the surroundings of the water meadows make it a very attractive place to visit … So I’d like to see a greater emphasis on tourism.”

Now, whilst I must agree that a tourism boost would be the most prosperous addition to Sudbury. My favourite rumour is the possibility of a Cinema. Who doesn’t love a good film?. A cinema, showing new releases,  would provide a good source of entertainment in the community, especially for younger people, like myself,  and would provide a much needed boost to Sudbury.

It all sounds good to me, although there seems to be a fair bit of opposition. A petition called Save Our Bus Stop has been started by local resident Teresa Bishop. To date, it's been signed by over 6000 people. Even from talking to my friends during the school day, I have seen some opposition to the bus move, with one friend saying “I don’t know why they'd do it, there is already a bus station, so why not add new things to boost tourism”.

Although I am generally for the move, I can see why there is opposition. The current bus station services lots of people everyday. From school students to families.  Moving the bus station could create chaos for traffic, especially in the short term. Not the mention the bus companies, who would have to factor in the change, creating, I'm sure, a bit more confusion into the mix.

Whilst writing this I found a survey on Suffolk County Councils website. So, if you have an opinion, make your voice heard, as it could affect the future of our lovely little town! Just click here to take part in the consultation

So, what do you think? Like the movie idea? Want a Cinema? Or cant be bothered with the fuss? Why not leave a comment below

Hi, I'm Alex, a Sixth Form student at Thomas Gainsborough school. I am studying Philosophy, Sociology and English Language, so discussing current and opinionated topics is my thing!. I enjoy playing piano...

Questions you need to ask when getting a website designed

The latest business news from Moore Green Chartered Accountants
Sign up for offers
Sign up for what's on guide
Become an author
Popular Categories
By clicking 'ACCEPT', you agree to the storing of cookies on your device to enhance site navigation, analyse site usage, and assist in our marketing efforts.
For more information on how we use cookies, please see our Cookie Policy.