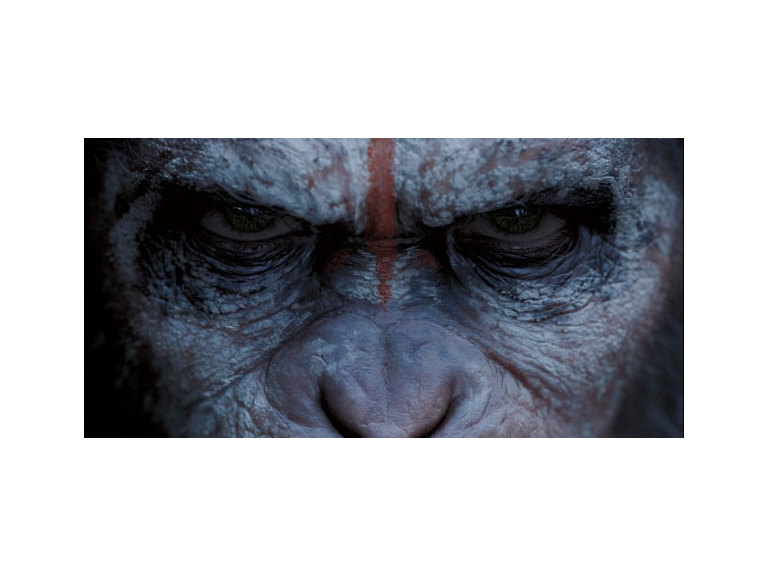 Dawn of the Planet of the Apes takes place roughly 10 years after its predecessor, and continues the story of an ever-growing ape population, contrasted with the dwindling humans that remain. A devastating virus spawned from simians caused a huge majority of the human population to die-out, leaving only a fraction behind. The apes however, have lived in peace within the isolated forests surrounding any previous man-made cities now reclaimed by nature, and have done nothing but develop and thrive within their own communities. All this tranquillity is not infinite though, and after a small group of surviving humans stumble across a mass of apes, tensions begin to rise.

This is possibly the most bare-bones summary of the plot I could provide, as giving anything else away would probably spoil the movie. This is because it's largely unpredictable in its plot, which is nothing but a huge benefit to the film as a whole. Just as events seem to point towards a clear conclusion or development in the story, something else happens which completely throws any pre-conceived ideas out of the window. I went in to the film with very little knowledge of how the story would play-out, and this is by far the best way to view it. Aside from some minor foreshadowing, it's unlikely anybody will be able to predict the ending before the final act begins at the very least.

Now, although it may seem from the trailers that Dawn of the Planet of the Apes is a largely action-driven movie, this is certainly not the case. In fact, when the action does become the centrepiece of the film, I was longing for it to end sooner rather than later. This is entirely thanks to the numerous outstanding performances presented by the stellar cast. Jason Clarke plays Malcolm, the leader of the human group, and is accompanied by Gary Oldman as his violent, jaded 'friend' Dreyfus. Although it could be argued that it comes down to the special effects being spectacular, the best performance in the film by far (and possibly one of the best this year) is that of Andy Serkis as Caesar - leader of the apes. Caesar is a prime example of how outstanding the film looks visually, as there are numerous scenes in which very little dialogue is spoken, and yet the viewer understands entirely what is happening solely due to the emotions conveyed on Caesar's face. This is the same for all of the apes, as none appear generic or boring. Each is given a unique and distinctive personality almost entirely through their appearances, and these beautifully mirror characters within the human group. For example, Malcolm's dubious friend Dreyfus is excellently paralleled with the warmongering ape Koba (Toby Kebbell), something which is apparent for many members of each respective species.

I'm finding it very difficult to think of any considerable negatives within the movie. The cinematography and special effects were jaw-dropping, and the acting was considerably above-average. Even for a film that runs for over two hours, there was never a moment throughout in which I felt genuinely bored, which definitely isn't something I can say for other releases this year. The only flaws that the movie really suffers from are typical film-tropes, such as main characters surviving almost certain death, and practicalities allowing certain events to progress. However, when compared to everything the film does right, these seem almost ignorable at the very most.

Verdict
Dawn of the Planet of the Apes manages to surpass its already great predecessor and then some. Some may find the abundance of drama over action slightly dragging, but the film does such a good job of conveying conflict through dialogue that I really didn't find myself longing for more explosions or fighting. When there is violence it remains entertaining, but where the film really succeeds is with its characters and symbolism. I'd definitely recommend seeing this movie - especially if you enjoyed the first.

I'm a huge fan of films, and can be pretty opinionated on topics concerning cinema or my favourite movies.