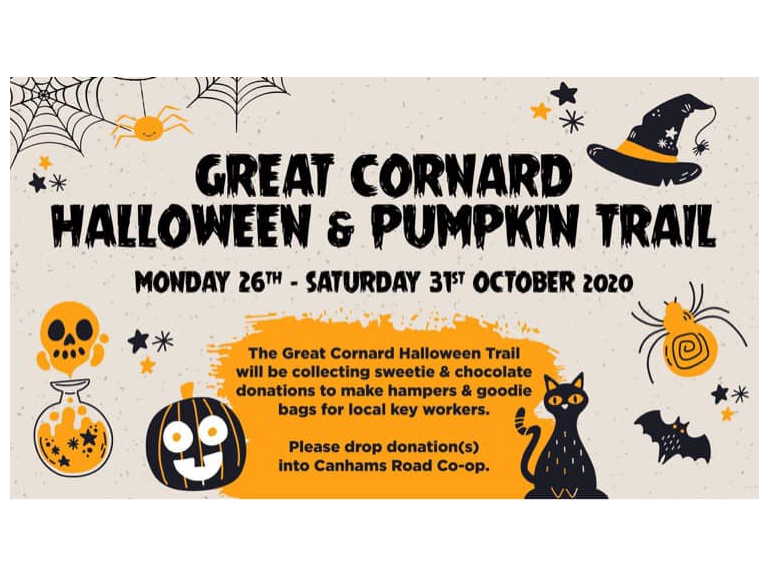 Residents of Great Cornard, will still be able to get out and about this Halloween with a spooky and pumpkin styled trail.

With the traditional trick or treating not likely to take place this year, this is a great idea which has been greatly received by the residents, with around 60 people already taking part.

The trial takes place between October 26-31 and has been put together by Laura Dantzic who hopes it will give families an alternative to trick or treating this year.

She said: “I thought I’d give a pumpkin trail a go as trick or treating is out of the question this year and a lot of Halloween events have been cancelled, so gives families something to do in half term.

The trail has been put together to help families get out and about in their community.

“I have a 5-year-old and an almost 2-year-old, and it was nice to get them out in the fresh air with a purpose to the walk,” She said.

“With a lot of events being cancelled this year, it’s a good way of still being able to do something to celebrate Halloween,” she added.

This is the third trail Mrs Dantzic has organised this year. The cornard resident previously run a trail in aid of Colchester Zoo and a scarecrow competition to help the Storehouse food bank.

She said: “Since lockdown I have organised the Great Cornard zoo trail where we raised £1,400 for Colchester zoo back in May.

“In June I organised the Sudbury and surrounding villages scarecrow competition where we raised over £700 for Storehouse food bank.”

Mrs Dantzic, set up the zoo trail to help Colchester Zoo with their financial difficulties.

She said: “Colchester zoo were really struggling to stay a float with not being allowed to be open, so no revenue coming in, yet they still had to care and feed for all of the animals.

Alongside the Halloween trail, Mrs Dantzic has also organised ‘hampers for heroes’. Donations are being collected until November 1 at the Co-Operative in Canhams Road.

Mrs Dantzic hopes the hampers will act as a ‘thank you’ to teachers and staff at local school and care homes for all their hard work during these difficult times.

She said: “I’m asking everyone who takes part to donate sweets, chocolate or a packet of biscuits and I’ll be making hampers of sweet treats for the teachers and staff at the local schools and mellish care home in Cornard, to say thank you for everything they did for our children and some of the most vulnerable in our community during lockdown.”

For any more information on the Halloween and pumpkin trail, visit their Facebook page.

Hello, I am Johnny. I am a local to Sudbury and love sharing breaking news stories with a local twist.