Anyone who's met me, knows I love a good pint of proper beer - not the fizzy, bland stuff known as Cooking Lager, but the decent hoppy stuff, with flavour.

A few years ago, as this blog post explains, I was fortunate enough to brew my own beer, with in a small Suffolk Micro Brewery,  & raise money for a breast cancer charity, inspired by my friend Caroline. Fast forward to 2016, although my friend is no longer here, I have continued to brew in her memory now fundraising for the Willow Foundation.

If someone were to ask me which five beers would I take on a Desert Island, one of my top choices, would be LemonHead, a popular beer brewed by Nethergate Brewery, in Pentlow, Nr Clare. They are also big supporters of LeeStock Festival, so I felt I should approach them to see if they would be brave enough  willing to let me into their professional brewery, create a beer and then let me help them brew it. I was delighted they agreed and they too thought it was a good idea.

I arrived mid morning, ready to get stuck in. Paul Gower, head brewer had been getting the things ready from 6.30am, so the smells of malt drifting from the brewery were wonderful. Before I'd arrived, and even the night before, the malt had been milled, put into the hopper & dropped into the mash-ton, where it was sparged with water. It's this process that allows the hot water to run through the malt and create this sweet liquid, wort; a warm watery ovaltine that forms the basis of the beer.

I was told that the last couple of years have been really good for quality malt, This has the excellent knock on effect of more efficient brewing and therefore more beer!

The warm sweet wort is then sent to the copper, or brew kettle as it's also known, along with the first infusion of hops; Brewers Gold and First Gold. This is then boiled rigorously.

Whilst the wort and hops are doing their thing, we take samples of water, pre and post boiling, the mash and the wort, to check the pH levels. Essentially a water softener is added to remove the hardness of the water from the copper.

I carefully measure out the finings. These extracts of seaweed help with the process of giving the beer clarity and removes the lumps of organic matter (the grain, hops etc) The finings have to be added 12 minutes exactly before the end of brew. It's very precise.

But before we do that, it's time for tea. Not of the cuppa and biscuit sort, but of the hop sort. I love hops. The more the merrier, I say. We add the remaining three different type: Boadicea, Brambling Cross and Willamette, a hop from the US. In total 6.7k weight were added to hot water, stirred in and left to brew for about 30 minutes. They were shortly added to the beer-to-be in the copper. 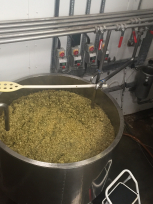 At exactly 12 minutes before the boil was turned off, I added the finings to what would be soon 5600 pints of golden ale. The 93g of finings will make sure it's a clear not murky beer. An interesting fact I learned a few years ago, is that when you see an old pub sign that says Fine ales sold here, this didn’t necessarily to mean they were fine, as in good quality, but "fine" as in the beer had gone through the "fining" process. There was no guarantee the beer tasted good, only that it looked the part.

Paul took a sample of the liquid to test its gravity, which allows him to work out the eventual % ABV . For Golden Willow, this is going to be 4%

Once the boil is complete, leaving it to rest for 45 mins, it's time to move the beer-to-be from the copper to the vessel, where we add the yeast. The liquid is taken through a series of pipes, via the water cooler exchange and a ten minute blast of O2, helps create a foamy head. As well as the regular yeast, a yeast vit is added. This is a bit like a yeast booster, to help with the fermentation.

For optimum fermentation, the beer has to be kept at 21 degrees. The vessel's temperature is carefully monitored and should the temperature rise, especially during our warmer months, a cooler plate will automatically be activated to keep the beer at its correct temperature.

Because of this efficient way of fermenting, the beer will be ready to go within 10 days. Golden Willow will be officially launched on the 21st May at the Sudbury Waggon and Horses and then onsale at good pubs in the region from the 22nd May and of course at LeeStock Music Festival on 28th and 29th May at Long Melford Hall.

We hope the beer will raise £1000 for the Willow Foundation. Why not buy yourself a pint and do your bit for charity. 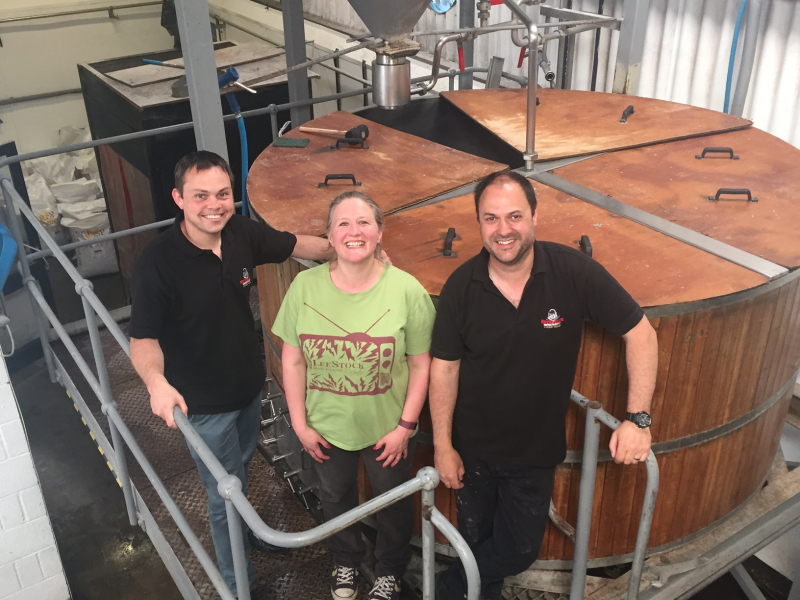