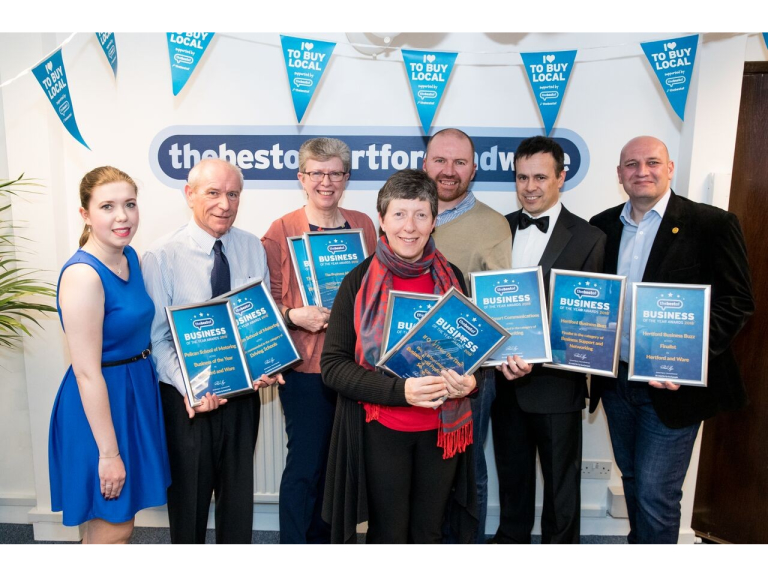 Pelican School of Motoring and WordSmart Communications, both members of the local branch of the business guide, were singled out for praise in a ceremony attended by Richard Higson, head of thebestof in the UK.

Hertford’s Pelican School of Motoring was pipped to pole position, finishing second in the UK in the Driving Schools category. However, it did pick up the Business of the Year crown for thebestof Hertford & Ware.

Owner Steve Hunter said: “We are delighted to be named as a national finalist in thebestof Business of the Year awards for the third year running, and winning the Hertford and Ware prize was a lovely surprise. We’ve been helping learners to pass their test for more than 25 years, but it is always satisfying to be recognised for all your hard work.

“Finally, I would like to say a massive thank you to all our clients who submitted positive reviews!”

Ware based WordSmart Communications, run by award-winning journalist Barry Hunt, also finished second in the UK, this time in the copywriting category. It was also highly commended in thebestof Hertford & Ware.

Barry said: “I’ve only been in business for 18 months, so I’m shocked and delighted to be named as a national finalist. Although I’ve now got clients as far afield as Oman, it really means a lot to be supported by local businesses, including many thebestof members.”

thebestof Business of the Year awards attracts thousands of entries from companies across the country. Unlike other awards which only rely on entry forms, thebestof rewards businesses which receive positive testimonials from satisfied customers.

Victoria Hunter, who hosted the awards ceremony in the offices of thebestof Hertford & Ware, was delighted with the success of the local members: “I was so pleased that Richard was able to make it down from thebestof HQ in Birmingham to present the awards, it was a lovely way to reward our hardworking and successful local businesses.

“Once again, thebestof awards have proved that the size of your business is no barrier to national success. With more and more businesses joining our group, everyone at thebestof Hertford & Ware is hoping to have more success in the future.”

Here is a rundown of the Hertford & Ware winners:
o Hertford Business Buzz: finalist in Hertford and Ware, UK finalist in Business Support and Networking.

How much is a burglar alarm really going to cost in Hertford and Ware?
Sign up for offers
Sign up for what's on guide
Become an author
Popular Categories
By clicking 'ACCEPT', you agree to the storing of cookies on your device to enhance site navigation, analyse site usage, and assist in our marketing efforts.
For more information on how we use cookies, please see our Cookie Policy.