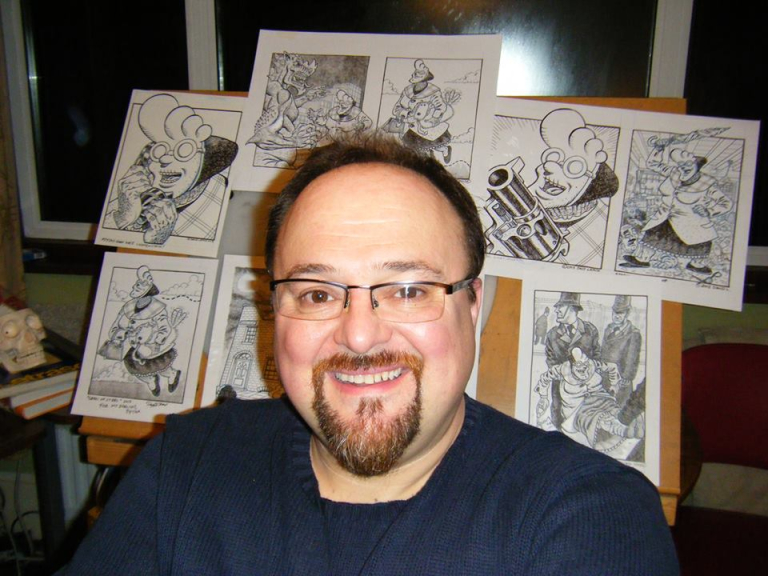 With sucn an extentsive guest list we asked for more information about the special guest list and this is what was provided for David Leach.

Cartoonist, writer, colourist, letterer and editor. After leaving art college I worked for animation legend Bob Godfrey as his ghost artist on Henry's Cat. In 1987 I went freelance and created Psycho Gran for kid's comic, Oink! Co-wrote and co-drew The Driver and created The Dinner Ladies From Hell for the cult British comic, Toxic! Co-wrote and drew for Marvel US. Created Arthur Pilkington: Chartered Barbarian for the comicsGas & UT and created Edith Appleby: O.A.P Warrior for Brain Damage.

Crossed over to the dark side in 1993 and became an editor working for Marvel UK on titles including: Beavis & But-head, Ren & Stimpy,Rugrats and the Glam Metal Detectives. In 2000 I took a six-year break to pursue animation before joining Titan Publishing and editing titles such as: Roy of the Rovers, Lenore, Nemi, SpongeBob Square Pants, Pocket Gods, Matt Hatter, Wallace & Gromit and Adventure Time.

In 2011 I started work on brand new Psycho Gran comic strips for a variety of titles including: Spirit of Hope charity book, David Lloyd's Aces Weekly and Lise Myer's Nemi magazine before launching her in her own, all-new digital comic Psycho Gran which launched exclusively on Comixology in March 2014. In 2013 I was also a co-winner on Come Dine With Me.

In my spare time I avoid gardening and spending time with the wife and kids by going to the cinema whenever I can, writing a blog about my experiences at said entertainment venue and drawing comic strips featuring a 5' tall psychotic granny by the name of Psycho Gran

I have been helping raise the profile of local businesses and community organisations since 2011. If you need help please contact me.