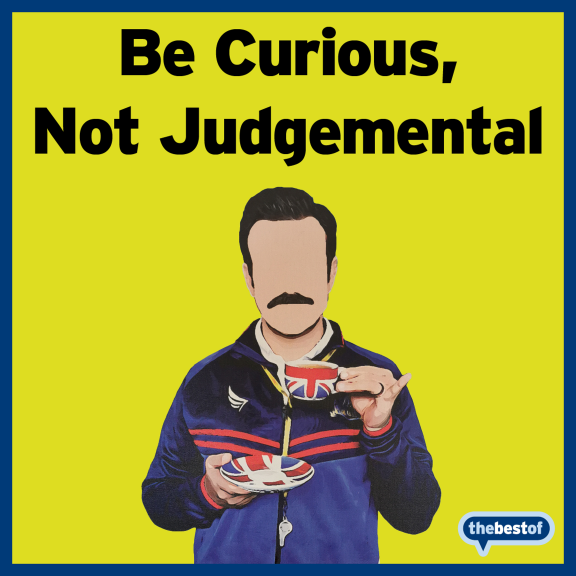 At a recent event, the host showed a clip from the Apple TV series, Ted Lasso.

It's a brilliant, thoughtful and wonderfully written comedy-drama and the clip he showed, from Episode 8 had a quite profound impact on me.

If you haven’t seen Ted Lasso, go to YouTube and search for "Ted Lasso Darts" to see the clip.

[Context: Ted is in a pub, about to play darts for a huge bet, with the ex husband of the owner of the football club that he manages. Everyone assumes Ted will be rubbish at darts…]

“Guys have underestimated me my entire life, and for years I never understood why. It really used to bother me.

And then one day I was driving my little boy to school and I saw this quote by Walt Whitman, it was painted on the wall.

It said, “Be Curious, Not Judgemental”- and I liked that.

So I get back in my car and I get to work and all of a sudden it hits me, all them fellas that used to belittle me, not a single one of them were curious.

And I realised that they were underestimating me – who I was had nothing to do with it.

Cos if they were curious they’d have asked questions.

Questions like, “Have you played a lot of darts Ted?”

Which I would’ve answered, “Yes sir every Sunday afternoon at a sports bar with my father, from age 10 until I was 16, when he passed away…”

[At which point Ted closes out with two treble 20’s and a bullseye to win the bet. Stirring stuff]

The impact of the clip is greatly enhanced once you have the full background to it (a man who's continuously been underestimated and abused by almost everyone around him) but I swear those four words, "Be curious not judgmental" are the motto and the mantra of every successful entrepreneur.

But isn't it true that we judge ourselves by our intentions but judge others by their behaviour.
(That’s another line Ted could use!!)

The reality is it's really hard to be curious, not judgemental.

Especially if you've got to a certain stage in life!

But my God, it's important in dynamic times like these.

At a more functionary level, how do the more successful players in your market get their rhythmic stream of customers? Be curious. Not judgmental.

Blimey, that's a different idea. I wonder if it might work in my business? Be curious, not judgemental.

For this month at least, be curious, not judgemental. You might find you like it – and it comes in bloody handy…

Is there help to deal with Post Traumatic Stress Disorder?
Sign up for offers
Sign up for what's on guide
Become an author
Popular Categories
By clicking 'ACCEPT', you agree to the storing of cookies on your device to enhance site navigation, analyse site usage, and assist in our marketing efforts.
For more information on how we use cookies, please see our Cookie Policy.