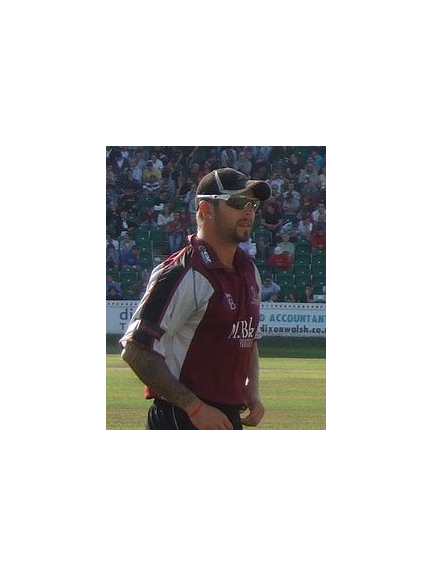 TREGO TRIUMPHS AFTER STUNNING SEASON Somerset’s Peter Trego has been crowned the FTI Most Valuable Player for 2012 after an outstanding season with both the bat and ball.

The 31-year-old all-rounder scooped the prestigious award by 60 points from Kent’s Darren Stevens to hand the Taunton side their third triumph in the competition in four years. Trego made 600 Championship runs at an average of 33.33, whilst the first 50 wicket return of his career at a meagre 3.07 proved an invaluable contribution. In the CB40 he racked up 245 runs from just 188 balls in 11 matches, whilst taking 15 wickets at 6.03. In the FLt20 he hit a further 52 runs and took 2 wickets. In total, Trego, who was the fourth highest wicket-taker in the country, hit 897 runs and took 67 wickets in all competitions. His triumph, which takes him up to third in the all-time rankings, follows wins for his county skipper Marcus Trescothick last year and in 2009.

The difference in his points total and second place is the highest for four years. He said: “I’m both surprised and delighted to win the FTI MVP. I know I’ve had a good season personally, but to come out top of the heap in the competition is a real bonus. “It’s also great to follow in Tres’s footsteps and to keep the award at Taunton for another season. I suppose it’s a reward for a long season. “Whilst we haven’t won any silverware this year I’m confident this team has a trophy in them. It would be great to take my form into next season and really kick on.” Trego’s average number of points per game (14.11) is bettered by only two other players in the top ten – Glen Chapple of Lancashire and Toby Roland-Jones of Middlesex. He first hit top spot in the FTI MVP rankings in the first week in June only to lose it again to Andre Adams of Nottinghamshire. He then overtook Steven Croft of Lancashire on August 2nd and never looked back.

Kieron Smith, Senior Vice President, FTI Consulting said: “Peter Trego has once more shown what an outstanding county cricketer he is. His consistent performances with bat and ball for Somerset across the season has helped them secure second place in the Championship and also cemented his third place in the all time FTI MVP list. “With bat and ball across all formats of the game he has proven his worth to Somerset and the FTI MVP award is just reward for a cricketer who always gives a 100 per cent for his team.” Introduced in 2007, the FTI MVP rankings reward players for every run scored, every wicket taken and every catch held. There are also bonuses awarded to those whose runs and wickets contribute to a win for the team, with captains earning points for their command of the side.

Bowlers receive higher marks for among other things good economy rates, bowling maidens and for dismissing batsmen higher up the order. They can also win bonus points for five or more dismissals in an innings. In addition, batting points are handed out for high run rates and the percentage of the team’s runs each batsman contributes. Fielding points are awarded for catches, run outs and stumpings.