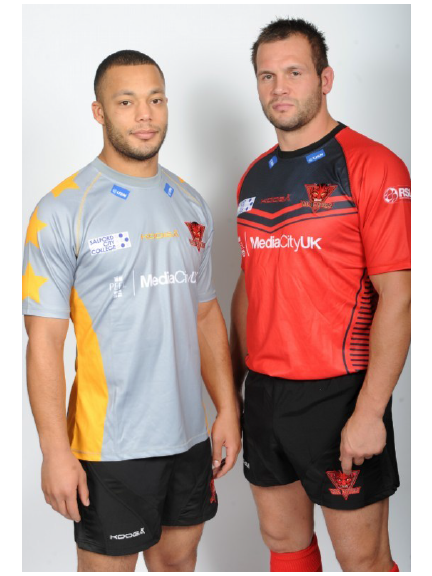 Another Friday night at The AJ Bell Stadium, and another disappointing result for Koukash's expensively assembled Red Devils Squad. Warrington Wolves were the visitors, thanks to the class of former Salford hero, Stefan Ratchford, registered their third Super League win running out 28–12 winners over a threadbare Salford side.

Salford, having been hit by injuries and suspension, handed a starting debut to loan-signing Wigan Warriors winger, Dominic Manfredi. The Warrington supporters in numbers made the short trip down the M62 expecting Tony Smith's troops to gain a second successive win away from home. In contrast, the Salford support could be forgiven for feeling nervous of a rout, considering the injury nightmare that continues to curse Salford's season.

The Devils were without the services of long term casualties, Rangi Chase, who remains on the sidelines with a leg injury sustained in the season opener against Wakefield, whilst enforcer Gareth Hock continues to recover from an ankle injury. The ongoing loss of Chase and Hock was clear to see as the Wolves eventually fought off a Salford resistance.

The pressure of recent below par performances looked to be weighing heavy over Salford as they made a nightmare start with Tim Smith spilling the ball from the kick off to put his side under early pressure. The precedent for Salford's evening was set minutes later when Jake Mullaney threw the ball straight into touch with a pass intended for wingman Greg Johnson.

The Warrington side made metres with ease and camped on Salford's line. Ben Westwood looking to have scored as he stretched over the line, although Referee Thaler thought otherwise, one disallowed try shortly followed by another as Joel Monaghan had a touchdown ruled out after quick handling.

Salford's resolve was broken minutes later as Chris Bridge sauntered over in the corner, the first of a three try blitz conceded in nine minutes. Gareth O'Brien who was on loan at Saints last season was causing chaos for the Salford defence with his clever kicking game.

Mickey Higham, the Warrington hooker, again showed why Salford should have signed him years ago as he skipped over the whitewash to score, Ratchford adding the extras from the touchline. Things went from bad to worse as Gareth O'Brien's kick rebounded off the post, the ball then hacked sideways for the impressive George Ormsby to collect and cross in the corner.

As the floodgates were threatening to open, Salford finally opened their account before the break, a clever flick by Devils' centre Junior Sa'u ended with Dom Manfredi bursting his way through to go over in the corner.

Warrington missed a chance to go further ahead when Ormsby dropped a pass from Ryan Atkins and the Wolves led 16–4 lead at half time.

Salford looked to have come out stronger in the second half when Harrison Hansen almost went over from a Tim Smith inside pass.

The game was now littered with errors and penalties. Nonetheless, Warrington were clinical enough to all but seal the result when Joel Monaghan touched down in trademark style, and Ratchford stretched the advantage to 22–4 with another perfect conversion.

Despite looking to be out of the contest, Manfredi sealed a debut brace as he collected a Tim Smith pass on the hour to reduce the deficit to 14 points, but Mullaney was again unable to add the extras.

If a Salford revival was threatening it was soon extinguished as Warrington went for the kill with former South Sydney Rabbitoh legend, Ray Asotasi, powering his way over and Stefan Ratchford landed his fourth goal of the night.

The injury curse once more struck for Brian Noble's side with the impressive Jason Walton being carried off with what looked like an ankle injury. With 15 minutes remaining the Reds did manage to make the score line respectable, if not flattering, when Salford's 'Man Of The Match' Greg Johnson - The Red Devils' most impressive player of the season so far - finished fantastically, collecting a Mullaney pass to squeeze over in the corner. Again, Mullaney failed to hit the target with the attempted conversion ending his night with 0/3.

"The honeymoon period is over and we did some silly things. We shot ourselves in the foot and didn't make the start we wanted." - Brian Noble

Brian Noble cut a forlorn figure as he was left to explain how his side have gone from two wins in the opening rounds of the season to three consecutive losses.

"The effort was good but we have to make sure we go in the right direction. We made too many errors and need to play smarter. We had six goes at them and scored three tries but their kicking game was better than ours and that was the main difference. We didn't quite handle their ruck speed either."

Noble also confirmed that centre, Jason Walton, would be out for some time with an ankle injury. As expected Dr. Koukash this morning took to Twitter to express his disappointment:

"Last night's performance is simply not good enough. Injuries cannot be used as an excuse and will not. We all deserve better results. Warrington are a good team, but that cannot be used as an excuse for not performing. They (Salford) were not even average last night. Our performances over the last five games have been not good enough and won't pretend otherwise. At the end of the day, I am a fan and want to speak my mind."