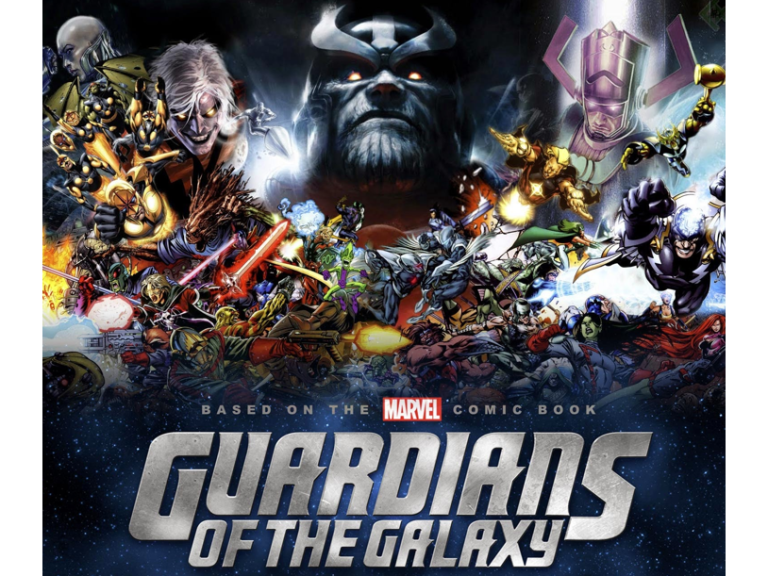 Who would have thought that, way back in 2007, Marvel would become this reliable and bankable brand? They seem to be able to do no wrong and ever since they released the mega popular Avengers Assembles they are going from strength to strength, releasing 2 fantastic films a year.

Now, for any other major movie studio there would be alarm bells sounding – how can Marvel continue this success without their franchises becoming stale and boring? Audiences crave something different and Marvel have abided by taking a huge risk on a comic book film that includes talking trees and gun-toting raccoons.

Guardians of the Galaxy follows Peter Quill, played by the ever lovable Chris Pratt, as he embarks across the Galaxy with an orb that causes nothing but trouble, bringing together a plethora of criminals and misfits that form a heroic(ish) team that is capable of saving the galaxy from evil! I just want to point out that the plot and general set up is the most normal aspect of film, leading to some wonderfully crafted set pieces, zany characters and hilarious one-liners. What else would you expect from a film that casts Vin Diesel as a talking tree!?

And talking of characters, Guardians of the Galaxy brings us some of the most memorable of the year with Rocket (Bradley Cooper), Gamora (Zoe Saldana), Drax (Bautista) and of course Groot (Vin Diesel) joining Peter Quill as we travel from spectacular planets to prisons to a very unique mining colony. Each character has their own grand individual moments as well as some expertly crafted, subtle bonding moments between the team.

You will fall in love with the sarcastic and hilarious Rocket who pretty much steals every scene he is in, whether he is arguing with Quill or forming intricate prison escapes. Rocket is the perfect showcase of the “off-the-wall” tone that director James Gunn consistently nails throughout the film.

I would be remiss if I didn’t mention how Chris Pratt flourishes as the lead, taking on the role of self-styled outlaw Peter Quill (or Star-Lord) and completely making it his own. The result is a charming, goofy, hilarious, charismatic and all round fantastic performance that anchors the film with equal amount of emotional and comedic gravitas. Chris Pratt has been one of the revelations of 2014, impressing in LEGO Movie and will continue to do so with many more big films lined up – remember that name!

The writing in Guardians is fantastic with James Gunn showing plenty of wit and heart, encapsulating the banter and connection between the team that genuinely makes you care as we fly into the epic third act. In fact, the best scene isn’t an action sequence but a 5-minute scene of the Guardians just arguing in a circle as they slowly come to realise that they need to save the day. The dialogue is sharp and the chemistry between the actors is perfect – I couldn’t help but just sit back and enjoy this expertly crafted team that made for my favourite film of the year.

There is so much more I would love to talk about like the awesome soundtrack or the hilarious pop culture references but I just say this: I was riding a wave of euphoria throughout my viewing of Guardians and continued to do so well afterwards and in all honesty, I can’t wait for my second viewing. Sure, there are flaws like the main villain being a bit bland and forgettable or the fact that Peter Serafinowicz is criminally under used but it doesn’t impact on the most fun you will have in a cinema in 2014. I couldn’t recommend this Guardians of the Galaxy more.

Vue Cinema
Why not check out this Cinema business in Salford. Vue Cinema is a 'thebestof' business member.
Latest Articles

Dawn of the Planet of the Apes Review
Sign up for offers
Sign up for what's on guide
Popular Categories
By clicking 'ACCEPT', you agree to the storing of cookies on your device to enhance site navigation, analyse site usage, and assist in our marketing efforts.
For more information on how we use cookies, please see our Cookie Policy.