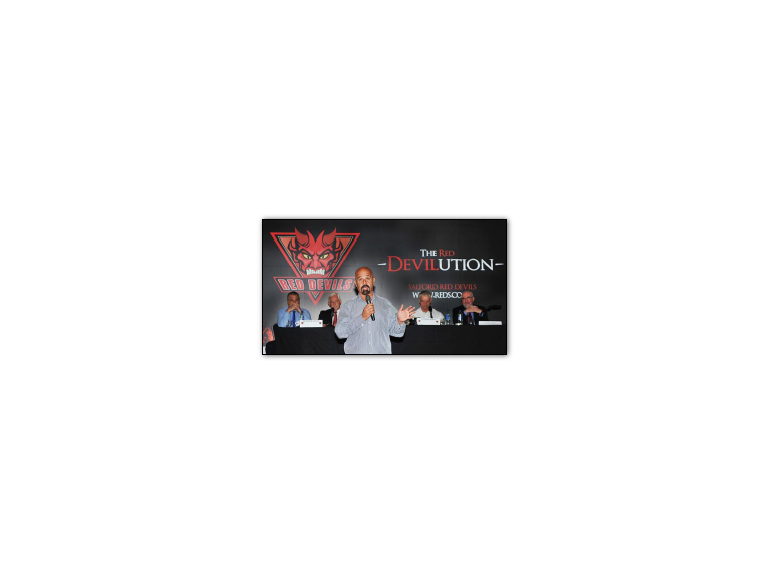 The City Reds are dead, long live The Red Devils!

Dr Marwan Koukash, the saviour of Rugby League in Salford, welcomed a 450-strong conference room with a statement of intent that was welcomed with a frenzy of cheers and chants of "Salford! Salford!" from the throng of Salford supporters in the room.

"I was called 'Marwan No-Cash' and 'Marwan Cash-Cow'. My name is Marwan Koukash and I mean business."

This was the quote of the day as the good doctor continued to increase his reputation as a no-nonsense firebrand.

Being witness to such an event, for me, was groundbreaking. With Koukash announcing not only his plans and signings for the 2014 Super League season, but also casino blueprints, Martin Luther King references, and a blast at rival club coaches. Koukash is determined to make The Salford Red Devils the biggest club in world rugby league.

The flamboyant and eccentric Palestinian businessman arrived as a migrant to the UK as a 17 year old refugee and became a multimillionaire as a horse-racing owner.

Koukash has wasted little time in becoming the envy of the Super League, shaking up the mundane league by calling for a raise in the salary cap and announcing his plans to make Salford the biggest rugby league club in the world.

With bold plans and big promises, Thursday brought some of these promises to fruition. Already Koukash has changed the club's name – going back to our traditional nickname of the Red Devils – one that was bestowed upon Lance Todd's heroes in the 1930's. Whilst also appointing a world class coach in Brian Noble.

The acquisition of Rangi Chase and Tim Smith at 6 and 7 give The Red Devils arguably Super League's best halves combination, while Hock, Puletua, Morley and Martin Gleeson give them size and experience in the forwards.

However, Koukash is not done yet, and is promising Salford supporters this is just the beginning. It is all part of the "Red Devilution".

Koukash, who you could say is more entertaining and upfront than most rugby league club owners, has been the star attraction of a somewhat limp 2013 Super League campaign.

Many respected figureheads in Rugby League circles are drawing parallels between Salford and Australian juggernauts the South Sydney Rabbitohs who, under Russell Crowe, have gone from wooden spooners to title favourites in a short period of time.

Crowe took over the Rabbitohs in 2006 and they are now one of the NRL's heavyweights. Koukash has a vision for Salford to be one of the title favourites for 2015. If you are neutral you can understand where these similarities come from. Both owners are high-profile and wealthy, passionate, ambitious and both trying to turn long flailing historic clubs around and in return bring in a new found glory.

Dr Koukash kicked off the launch of his newly renamed club with a passionate speech, where he denied Salford had approached contracted players illegally – accused of by Wakefield Trinity coach, Richard Agar.

"The days that other so-called big clubs came and took our best talent have gone."

Koukash then went on record to state Salford hadn't gone over the salary cap:

"I haven't paid any of the wives and I have no intention of doing so, except my wife."

Koukash, a man with a devilish sense of humour, then went on to make a joke about gelding Rangi Chase – the horse named after the prominent player, not the former St George Illawarra Dragons half himself – and compared rugby league to horse-racing:

"He's got an issue, he loves the ladies too much and doesn't concentrate on his job. So, we're going to have to get him gelded...No, you don't understand, I'm talking about the horse."

Mixing humour with seriousness, Koukash also unveiled his plans to build a casino, bars, restaurants, a water park and shopping units around Salford City Stadium, to promote a destination Salford.

Being an eager onlooker and lifelong Salford supporter my opinion is that Koukash has undoubtedly brought our great game into the minds of the wider public. The sport needed someone to shake it up and get people talking and Boy! Dr Marwan Koukash certainly does that!