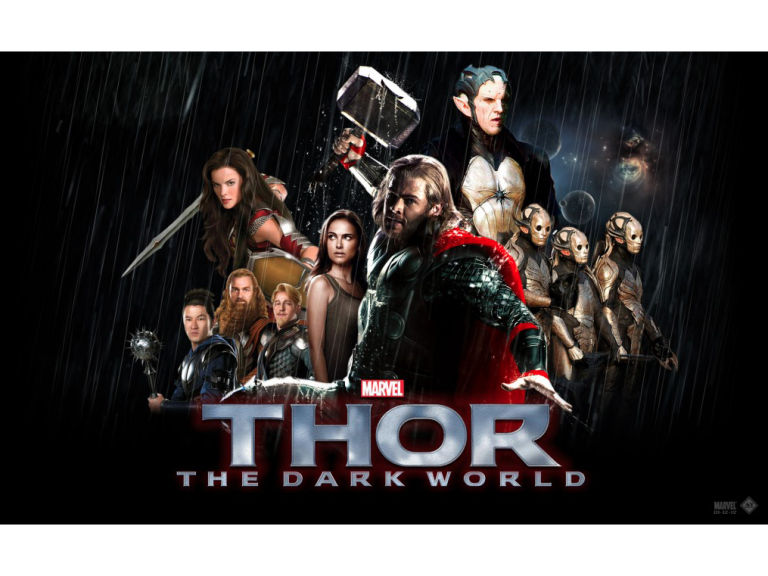 Marvel’s cinematic universe is a very ambitious, and successful, project led by the creative comic book experts over at Marvel Studios. Their jump from page to screen has definitely been a success with their previous 2 films (The Avengers and Iron Man 3) grossing over $2 billion between them. But what does that mean for Thor: The Dark World (or Thor 2)? It means very high expectations, and I am thrilled to say that Thor 2 smashes these expectations.

But what is Thor: The Dark World all about? Well, in the aftermath of "Thor" and " The Avengers," Thor fights to restore order across the cosmos but an ancient race led by the vengeful Malekith returns to plunge the universe back into darkness. The film takes us from Earth, across the Nine Realms as Thor takes on his most personal journey yet!

The original Thor had the very difficult task of introducing the most unrelatable hero in the Marvel universe to a mainstream audience, at the same time as creating the gorgeous world of Asgard (Thor’s home planet). Whilst Marvel were initially successful in both these aspects, the first film left me craving a lot more from this part of the universe.

This is the first aspect of Thor: The Dark World that I fell in love with. Building upon the foundations left by Kenneth Branaugh, this sequel boasts an intricate and complicated universe that is both beautiful and frightening at the same time. The science fiction elements of Thor’s story have been fully realized, and this is mirrored by the design of Asgard – looking more like a futuristic metropolis rather than a Mythical city. I found myself getting lost in the design and detail in which Marvel have lovingly crafted.

The universe is beautiful but that doesn’t really mean anything, if we don’t have any characters or a story to care about. Again, Thor 2 does not disappoint. Chris Hemsworth makes the return as the mighty Thor and does a fantastic job of looking and sounding the part. Like in the original Thor and The Avengers, Hemsworth has crafted a character that is charismatic, funny and imposing – but Thor is not the star of the film.

That accolade falls to Tom Hiddleston with his portrayal of Thor’s brother Loki, who is constantly dancing this fine line between redemption and the dark side. He is the most unpredictable and interesting character on screen, as we see Loki hit rock bottom after the events of The Avengers. Hiddleston steals each scene he is in, whether it is one of vulnerability or just Loki throwing witty quips at Thor. A mesmerising performance.

A relationship potrayed in Thor: The Dark World that doesn’t hold up as well is the romance that supposedly blossoms between Thor and Jane Foster. It is one of the worst fleshed out romances in the Marvel universe, and the audiences are supposed to accept that they have fallen in love after a total of 3 days together. It is a stagnant Hollywood trope that needs to be retired as audiences just won’t accept it anymore.

The story of Thor: The Dark World exists to serve the great cast of characters that exist within this universe. The villain’s, Malekith, motivations and goals are simple and uncomplicated, which leaves the focus on Thor, Loki and the supporting characters to develop and thrive. Even Malekith himself is slightly unforgettable, but it works in the context of everything else.

Director Alan Taylor (Game of Thrones) shows an impeccable eye for action, that expertly mixes serious tones with comedic ones - you will find some of the best action scenes in the Marvel universe within Thor: The Dark World. Taylor also shows a talent for presenting the scope and magnitude of this action to the audience, with the final scenes in London a personal highlight.

All these different aspects and positivity add up to an extremely fun movie that builds upon the fascinating ideas presented in Thor whilst also giving attention to the effect of The Avengers upon this shared universe. This is the second best movie that Marvel has produced, only coming 2nd to The Avengers.