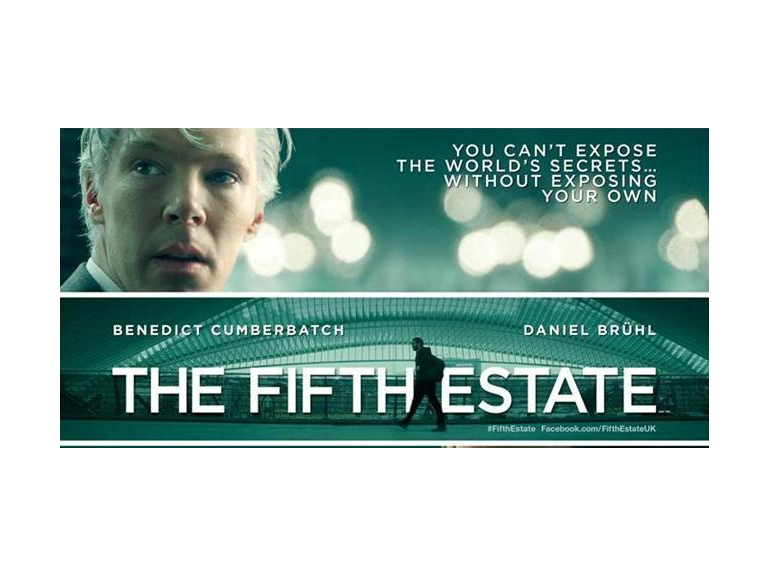 First of all, there has been a lot of controversy surrounding The Fifth Estate, mainly coming from WikiLeaks itself, about the accuracy of the events depicted in the film. I just want to make it clear from the start that I am judging The Fifth Estate purely from a moviegoer’s perspective and I am not taking into account any supposed inaccuracies.

The Fifth Estate is a biopic, detailing the rise of WikiLeaks from the perspectives of the infamous Julian Assange and Daniel Domscheit-Berg – and the story lies with these two characters, so they need to be strong and well cast. The Fifth Estate passes this first test with flying colours.

Benedict Cumberbatch (Sherlock), who plays Julian Assange, keeps raising his own acting to dizzying heights of quality. He is absolutely mesmerising, and for me, the main driving force behind the whole movie, stealing every scene he features in. Everything from his body language to his voice is perfectly replicated to mirror Assange. In a similar vein, Daniel Bruhl (Rush) is leaping from strength to strength as his talents are on display playing the more reserved, Daniel Domscheit-Berg.

Although The Fifth Estate can be hailed for it’s acting, the same can’t be said for its visual style. The film has been shot really well, with some spectacular shots of beautiful European cities being displayed but there are too many sequences of people typing on computers, with no dialogue and the audience being reduced to read text. This style can work in very small amounts, but it occurs too often. It is lazy filmmaking, to let text tell your story.

That being said, these text sequences are balanced out by the truly brilliant metaphorical representations of WikiLeaks that effectively show the size and scope of the company. They add style and substance to the incessant laptop typing as well as giving the audience a visual idea of what WikiLeaks is.

My main gripe is that the majority of the film is slow and sometimes outright boring. The first half is especially guilty of this, with little to no tension being introduced. I understand that a story needs time to brew and set itself up but I didn’t get that feeling at all. I felt that the audience was thrown straight in the deep end, with the script offering no tension – just line after line of mundane computer jargon that went straight over my head.

That’s not to say that the whole film commits this sin, with The Fifth Estate possessing some really good moments of tension and excitement. This can be attributed to the second half of the film, due to the introduction of a consistent antagonist to Julian and Daniel: The US Government, who are trying to track down and stop certain file leaks – without doubt the best parts of the film.

The Fifth Estate isn’t exclusively about WikiLeaks, as it also illustrates the various relationships that shaped its rise – mainly between Julian and Daniel. It is within the inconsistencies and scripting of this relationship that the film finds more problems. Julian and Daniel come to blows over differing ideologies, which is the catalyst for many events in the film, however I never felt that these arguments and disagreements carried much weight.

One example, without revealing any spoilers, is that Daniel and Julian have an argument that prompts Daniel to return home to his girlfriend. He tells her it was a mistake to leave and labels Julian manipulative. This is good, adding tension to the film but this is undermined almost immediately when Julian summons Daniel to a different country and Daniel trots over without a seconds thought. It is a missed opportunity to further explore the cracks in Daniel and Julian’s relationship.

In essence, the idea and basis behind The Fifth Estate is good, with some phenomenal acting from both Cumberbatch and Bruhl with some great moments to be experienced. However, the execution is sloppy and inconsistent, with most of the problems arising from the script and direction.