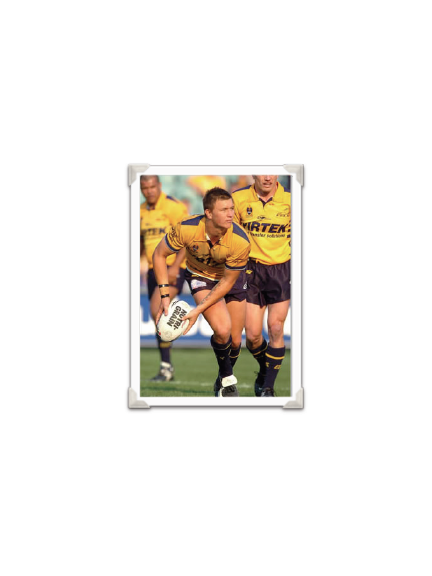 It was today announced that Australian halfback and Wakefield Trinity lynchpin Tim Smith has been snapped by the soon-to-be Red Devils.

The Wakefield chairman Michael Carter today issued a statement outlining the reason for the reluctant sale of Smith:

"Having conducted a review of the whole business and in particular the finances of the club, it has become obviously apparent that the club is completely under capitalised at this time to the tune of somewhere in the region of £400,000.

Therefore, ultimately it was my decision to sell Tim Smith to Salford with immediate effect for a substantial fee."

Former runaway Bay Seagulls and Kangaroos Schoolboy Tim Smith burst onto the NRL scene in the 2005 season and became an instant star for Australian outfit the Parramatta Eels, going on to claim the revered Dally M 'Rookie of the Year Award'.

Smith retained his impressive form through the 2006 and 2007 seasons, leading the Eels to the NRL finals in both years.

The rugby league world was then left stunned in 2008, When it was first revealed that Smith suffered from depression and he bravely held a press conference and confessed to his bipolar diagnosis.

Choking back tears, a clearly devastated Smith fronted the media to read a prepared statement:

"I was diagnosed with bipolar disorder 18 months ago and in this time have been seeking professional advice and taking prescribed medication to try and help me deal with the day-to-day life of someone with bipolar.

I am not using bipolar disorder as an excuse for anything that has happened in the past or my decision today.

However I am not coping with the constant media pressure and public scrutiny.

The hardest thing about this has been telling my teammates, who have been extremely supportive and understanding, as well as the Parramatta club, and my family and close friends."

Bipolar formerly known as manic depression is a mental condition where the sufferer's mood swings can be extreme. Typically they have very high highs, and low lows.

At the time of his admittance Smith felt he had returned to the field of Rugby League too early and needed to take some leave to deal with his condition, before being snapped up by Brian Noble the then head coach of Wigan Warriors in June 2008.

After an impressive 2 year stint in the Super League, Smith made a triumphant return to the NRL in 2010, signing on with the Cronulla Sharks, linking up with former Wigan teammate Trent Barrett to form a thrilling half back partnership.

After some stunning individual performance, Smith returned to the Super League in 2012 to play with the Wakefield Trinity Wildcats. Now a highly experienced campaigner, Smith has impressed the league, showing a level head, a sharp kicking game and a delicious passing ability that is the envy of the league. Smith played a pivotal part in Wakefield's push to the play-offs in 2012.

Smith possess an uncanny ability to spot gaps in a defence almost before they appear with a try-scoring creativity that will wow the Salford crowd, 2014 could most definitely be the year of The Red Devils.