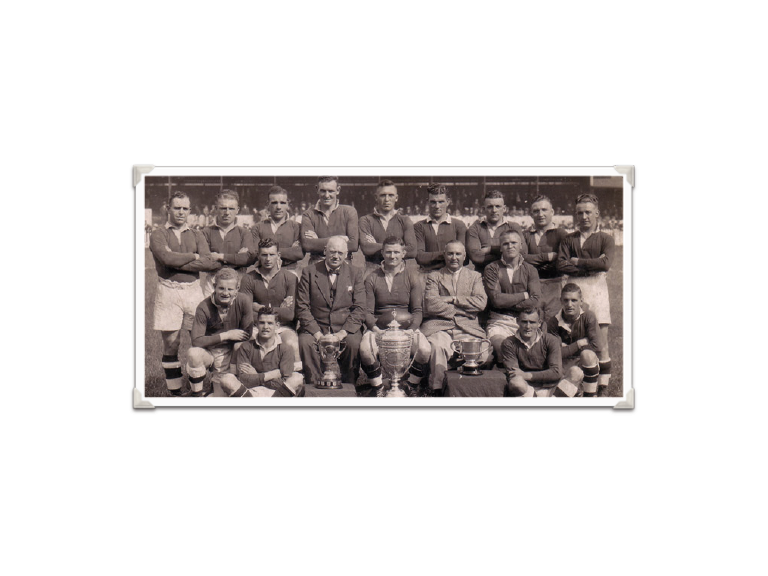 With only two competitive matches left of Salford's League campaign, eyes are firmly fixed on Salford's off field activities as they look to relaunch the famous 'Red Devils' moniker.

After a turbulent 2013 season, Dr Koukash and Reds' head coach Brian Noble have displayed the high ambition of which they now demand for the once famous club.

High profile signings Adrian Morley, Junior S'au and Saint Helen's duo Francis Meli and Tony Poletua, has ensured Salford have a formidable pack next year, and with the impeding announcement of Castleford playmaker and former 'Man Of Steel' Rangi Chase, should see Salford's league stock rise from humble foal to a supreme thoroughbred.

Thursday 5th September is the date that all Salford supporters have been waiting for, a day when Dr Marwan Koukash unveils not only a cluster of new signings but also the much anticipated launch of The Salford Red Devils. Gone will be The 'City Reds' tag and the return of our rightful name.

If you were curious as to where our famous nickname came from, below is a chapter adapted from Salford City Reds – A Willows Century, by Graham Morris*, available to buy in person and online via Amazon.

The Red Devils: The Originals

As the 1933/34 season drew to a close, stories emerged that the French, trying to establish Rugby League in their own country, had requested Salford cross the channel for a short promotional tour. Having visited England for six matches in March 1934, including appearing at The Willows, the French viewed Salford as `the premier side in the game'. Initially, they wanted the Reds to visit in August or September 1934, but with a new season starting, it was agreed the trip would be during October and November. The first club side invited to France, they won all six matches in spectacular fashion, creating a legend.

The opening game was one day after the Lancashire Cup final win against Wigan at Swinton. It was then a frantic dash for the players, who forgot any thoughts of celebration as they changed quickly before boarding a coach to London Road (now Piccadilly) railway station in Manchester. The journey was hampered by the large number of vehicles leaving the Station Road ground and they just managed to catch the 5.45pm train to London's Euston station. Transferring in London, they arrived at Folkestone harbour for a 1.15am crossing to Dunkirk.

Salford ran into Rugby Union opposition immediately, with sympathisers anxious to strangle French Rugby League at birth. The Stade Francaise club set up a counter attraction, meeting Biarritz in the capital's main stadium, Salford playing at an old racecourse on the outskirts of the city.

Nonetheless, the Reds drew 7,000 spectators curious to see the new game whilst only 300 turned up at the union fixture. Such was the interest in Salford's visit that, during the interval, players were interviewed on radio and some action was filmed for cinema showings.

The match programme had announced the visitors as `Les Diables Rouges de Salford' – the Salford Red Devils. A title the club and supporters have preserved with pride ever since.

The day concluded with an evening of celebration in the company of opponents, club officials and dignitaries, presumably followed by a long sleep!

The following Tuesday, Salford traveled some 300 miles south by train through some breathtaking and historic countryside to Lyon for the next match against Lyon-Villeurbanne, one of the top French teams at the time. After the Paris experience, the ground, just outside Lyon, surprised the tourists with its magnificence, having an adjoining bar and swimming pool.

Another train journey further south to the Mediterranean coast followed. This time it covered 200 miles and ended with an overnight stop in Montpellier, a few miles along the coast from Beziers, where they were to play the next day. Arriving at Beziers by road on Sunday morning, the party was greeted by the French club's president, after which they were driven through the town in open-top vehicles to publicise the game.

The ground was a former vineyard converted into a playing area. It contained no grass, only `white, dusty soil'. An audience of 6,000 turned up, considered a large showing for the small town. In the dressing room afterwards, the Salford players received huge baskets of grapes, which they quickly consumed.

On Wednesday, the intrepid explorers moved on, taking a comparatively short 60 mile journey inland by road to Albi, who Salford were to play on Thursday evening, the first of three matches in four days and a whirlwind conclusion to the tour.

After the Albi game, Salford were back on the road, heading for an overnight rest at Carcasonne before continuing back to the Mediterranean. The destination was Perpignan where opponents XIII Catalan met them in a Friday evening kick-off, a match repeated in 1984 to celebrate 50 years of French Rugby League. Once more, Salford found a ground recently leveled out, but containing no grass.

The final leg began Saturday morning, another road journey taking virtually the whole day, arriving at the Grand Hotel Gacha in Villeneuvesur-lot in the early evening. The Sunday afternoon fixture at the Sports Athletiques ground against Villeneuve (who would finish the inaugural 34/35 French season as champions) proved the most competitive of the tour.

The long trip home began on Monday and was concluded at Manchester's London Road station at 9.15pm on Tuesday. They received an enthusiastic welcome from the supporters and the almost forgotten Lancashire Cup was paraded before thousands of fans.

So for those who think this relaunch is one created by non-Rugby related marketing gurus, I hope reading the truth about Salford's heritage will spur you on to support the original 'Les Diables Rouges' in 2014.

*Graham Morris is a respected sports historian and former Salford RLFC club secretary. If you would like to order any of his publications please contact myself on cityredgirl@hotmail.co.uk