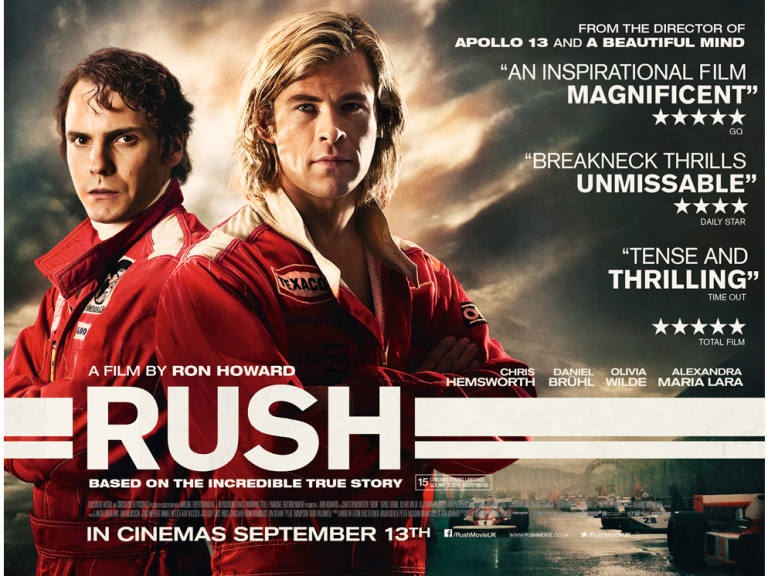 It is such a rare and treasured thing for a film to make us care equally about two separate characters, who are rivals, and make us completely invest in their struggles against each other. It is a very difficult task to try and balance two opposite motivations and personalities, and to give balanced screen time. Rush is such a film.

This should come as no surprise with the creative talent behind the films production, Ron Howard (needs no introduction from me) in the directors chair and Peter Morgan (Skyfall, Tinker Tailor Soldier Spy) on scribing duties. The film is dripping with creative talent and that's just the production team, with actors Chris Hemsworth (Thor) and Daniel Bruhl (Inglorious Basterds) in lead roles.

Rush is a biopic that chronicles a fierce rivalry between Formula One drivers, James Hunt and Niki Lauder, in the 1970's. James Hunt is the epitome of cool; his boyish charm and charisma are only matched by his hunger and dedication to winning races – brash, reckless and handsome. On the other hand, Niki Lauder is calm, calculating and often cold in the face of others. He is a businessman, just earning money the only way he knows how.

This is a deep character study of two different men, as you experience their strengths and their shortcomings you root for both of these men as they battle their individual demons and weaknesses. They are their own worst enemies, exhibiting both heroic and villainous qualities. It is this relationship (or rivalry) that is born between the two men, which is the main draw of the film.

As Hunt and Lauder grow, their rivalry grows with them, bringing out the best in each of them (both off the track and on it). Hemsworth and Bruhl give performances of a lifetime as their relationship transforms from bitterness to a beautiful rivalry – they both respect and envy each other. You will thoroughly enjoyed watching this realisation play out within each character.

The women of the film take an understandable backseat in a film dominated by two alpha males but their contribution is possibly the weakest part of the film. They sit back and let their men wreak havoc on themselves and each other; Hunt is particularly self-destructive and his wife, Suzie Miller, only served to make him less likable to the audience. The women's one saving grace is Marlene Knaus, who acts a pivotal plot point in the finale of the film.

For those people who aren't a fan of Formula One and are worried it may detract from the film – don't be. I dislike F1 yet found myself on the edge of my seat, heart pumping with excitement and a massive grin on my face as the roar of the engines blasted in the cinema. The spectacularly shot races are a joy to experience, constantly bringing the audience right in the heat of the action of this, sometimes, brutal sport.

My one problem with the film rests with some unnecessarily gruesome hospital scenes that are extremely hard and uncomfortable to watch. I realise that they are communicating the hard reality and danger of Formula One but I felt that it was just lazy audience manipulation. However, even that problem doesn't bother me in the grand scheme of things – maybe I'm just squeamish.

Rush is a prime example of an ambitious biopic, that doesn't shy away from the misgivings of its two heroes even going as far as to denounce the self-destructive nature of Hunt and the cold heartedness of Lauder. An incredible way to kick off Oscar Season.