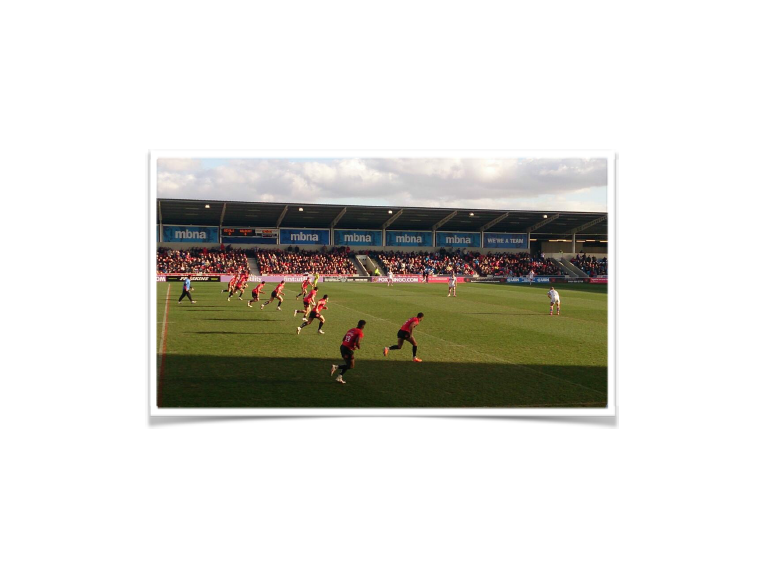 A record stadium crowd of 7,102 squeezed in at home to witnessed the newly renamed Salford Red Devils defeat a spirited Wakefield Trinity side 18–14.

Salford who finished bottom of the table in 2013, handed debuts to 13 of the 14 close-season signings and the carnival atmosphere wasn't to be silenced as Salford opened the scoring through England international Gareth Hock. Hock making his home debut and found a way to touch down after former Melbourne Centre Junior Sa'u flicked the ball back inside after a clever Rangi Chase grubber fooled the Wildcats defence.

Salford's pocket sized full-back Jake Mullaney has been given the kicking duties this year and didn't disappoint as he kicked the first of his three goals to put Salford into a 6–0 lead.

Wakefield, who were without their sensational new signing Jarrod Sammut, never looked like they were going to play second fiddle to the Salford party and toiled hard to keep a hungry Salford pack at bay.

It was a tense time for Salford when the Reds marquee man Rangi Chase limped of the pitch on the 29th minute, but it wasn't to prove a disaster as ex-Wildcat Tim Smith stepped up to the mark, turning provider as Harrison Hansen and substitute Andrew Dixon crossed the line just before half-time to give the Devils an 18–0 lead at the break.

If the Salford crowd thought that lead would signal an opening of floodgates then they were sorely mistaken as Wakefield dominated the second half.

Samoan international Pita Godinet defied jet lag having only been in the country less than a week, spearheaded a Wakefield fightback, scoring one try and creating another within 10 minutes of the re-start.

Godinet's excellent pass found second rower Matt Ryan who ploughed through a gap in the Devils defence before helping himself to a four pointer as he intercepted a Stuart Howarth pass from the scrum to send the travelling Trinity supporters into raptures. Sykes was spot on with his second conversion attempt and it was game on as the Wildcats turned up the heat.

Former Leeds forward Ali Lauitiiti rolled back the years as he proved unstoppable carrying several Reds defenders on his back as he brought Wakefield within four points of the home side, Sykes proving unsuccessful with the conversion.

It was squeaky bum time at The AJ Bell stadium as the home crowd found their voice to spur the Red Devils on as they absorbed the Wakefield pressure.

The match ebbed and flowed, the positives for Salford being that Gareth Hock proved himself irresistible in attack often leaving a Wakefield defender flat on the floor, whilst the capture of former Batley Bulldogs duo Greg Johnson and Jason Walton appears to be a stroke of genius from Brian Noble.

This certainly was a game of two halves and the second period was all Wakefield, not without help from referee James Child who unfairly penalised the Red Devils three times in succession. Salford were able to hold out as Junior S'au put his body on the line to stop a certain try. Unfortunately, S'au was injured in the process and had to be helped from the field.

With eight minutes remaining and Salford looking vulnerable former Hull FC winger Reece Lyne bombed the opportunity to snatch victory after dropping a Godinet pass. With only seconds on the clock and possession being awarded to Salford it was up to the Reds faithful to excitedly countdown the end of a pulsating encounter, and a victorious opening to the Red Devilution.