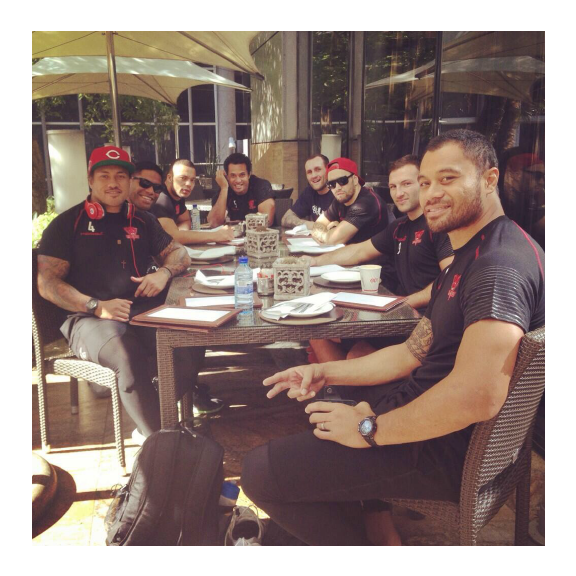 With less than a month to go before the start of Super League 2014, The Salford Red Devils continue to reinvent themselves as one of the most ambitious and professional clubs in Rugby League.

On the playing side, this week saw the Devils brand and squad go global, swapping the rain and wind of Southport for the sunshine and sand of Pretoria.

Brian Noble and his squad flew out to South Africa for an 18-day stay at the prestigious Ingwenyama Camp. The Ingwenyama Sports Resort is a world class, high-altitude venue, boasting high performance gyms, outdoor training pitches and state-of-the-art rehab centre.

Former Melbourne Storm Star and Samoa International, Junior S'au, has been delighting the Reds faithful with his enthusiasm, taking time out to tweet ticketing information, images of the Devils training and behind-the-scenes images of the squad visiting the world-famous, Kruger National Safari Park. Seeing the bond The Red Devils team has already formed has only further stoked the enthusiasm for the season ahead.

Whilst Brian Noble and his squad have been preparing in South Africa club owner, Dr Koukash, this week had his own 'Delia' moment. Just like the enigmatic celeb chef come Norwich Football Club shareholder, Delia Smith, during her now infamous half-time televised rallying cry in 2005 of "let's be having you!" to a packed Carrow Road, Koukash has publicly stated his disappointment in the Season Ticket Sales so far from Salford supporters. Who could blame him? For a city that has a population in the region of 233,000 it would only take 4% (8,000) of it's population to see The Red Devils become one of the best supported League clubs.

"Together we can make things happen and fulfil ambitions. The fans' response to what I want from them in return has not been as good as what I had been expecting. It should have been far greater and stronger. It's no use expecting free tickets – those days have gone. People now have to get behind this club and support what I am doing for the city and for the sport." - Dr Marwan Koukash

With only weeks remaining and all eyes on The Devilution the club needs your support. The failures of the past have gone, for good. This is a new club, a new belief and a new attitude.

Star signing, Rangi Chase, displayed this new attitude when he was quoted this week as saying, "I would urge all Red Devils supporters to get down to the stadium in huge numbers and support us, because we believe in the Dream, so should you."

Posters are available from The AJ Bell Stadium reception or as a PDF download online.