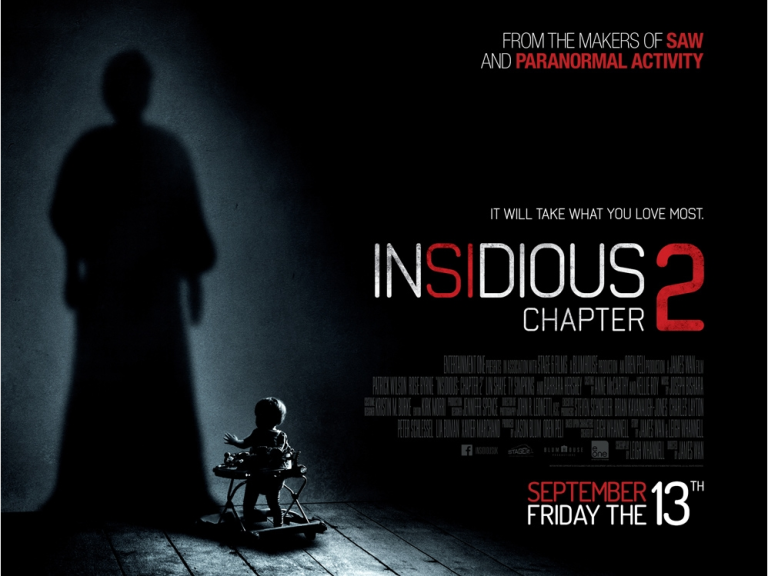 Horror films have got to be the most cliché-ridden genre in film, with Romantic Comedies running a close second. Whether it's the sheer stupidity of the characters involved or the infamous 'I will be back in a minute', the horror genre has become very predictable and stagnant. I am very happy to say that Insidious 2 is not only a refreshing entry into the genre but also one of the most interesting horror films I have seen.

As an audience, we are thrust straight into the action with an exposition sequence that serves to give background to one of the film's main characters, Josh Lambert (Patrick Wilson), where we see Josh as a child, being haunted by a demon. The scene immediately evokes a fantastically creepy atmosphere that is overflowing with tension. A great start to a film, that continues in the same fashion for the next 90 minutes.

This atmosphere is one of Insidious 2's greatest strengths, coupling a constant threat and presence of danger that never quite seems to let up with some superb settings. Nothing says creepy like a big old house with lots (and lots) of creaking doors and faded pictures! These fantastically spooky locations continue right through the film, with an abandoned hospital serving as my own personal highlight.

However, this threat of danger and the sense of the unknown notably drop for the film finale. I should also mention that, on the face of it, Insidious 2 just isn't that scary. The film relies on its story, setting and characters to set a creepy atmosphere rather than actively pursuing making the audience jump.

Clearly, a lot of thought went into making the universe of Insidious come alive with spine-tingling fear (characters looking through old photos is a perfect example of this) but this can often come at the expense of logical story telling. I found myself questioning why characters were visiting these (obviously) haunted locations at night, when they can easily get split up, lost or killed - A cliché of horror that Insidious can't escape. However, I recognise that these moments serve the impeccable atmosphere of the film. I just like my logic.

That isn't to say that Insidious 2 isn't without logic or brains, quite the opposite in fact. Insidious 2 is one of the smartest horror films I have seen, in terms of a tightly woven story across a franchise, and this is easily my favourite aspect of the film. I hadn't seen the original Insidious prior to watching the sequel, although I could comprehend the events, I felt if I had watched the first film, I would have appreciated certain moments slightly more. Without spoiling anything, fans of the original will get a great explanation to events in the first film!

It is within these explanations and logic that Insidious 2 carries itself to becoming a smart film. Seemingly unexplainable events that happen at the start of the film are given context with a very clever twist that makes you want to applaud. It may sound like an exaggeration but Insidious 2 presents us with these overdone poltergeist clichés (such as a piano playing on its own) and then twists them into their own unique and somewhat logical ideas.

Insidious 2 expands and evolves the ideas and events that makes up the original but it suffers from typical sequel problems. New audiences are given a summary of events from the first film, in the style of a police interview – which is fine; it is a clever way to satisfy newcomers and to not patronize knowledgeable fans. However, new audiences might still feel like they have been thrown straight into the action as the pace is very fast coming off the back of the original. There is hardly any time to breath, take in new information and build pace.

Insidious 2 may not be as scary as its predecessor, but the audience is more than compensated with an abundance of creepy atmosphere and genuinely interesting story that serves to excite fans, both new and old!