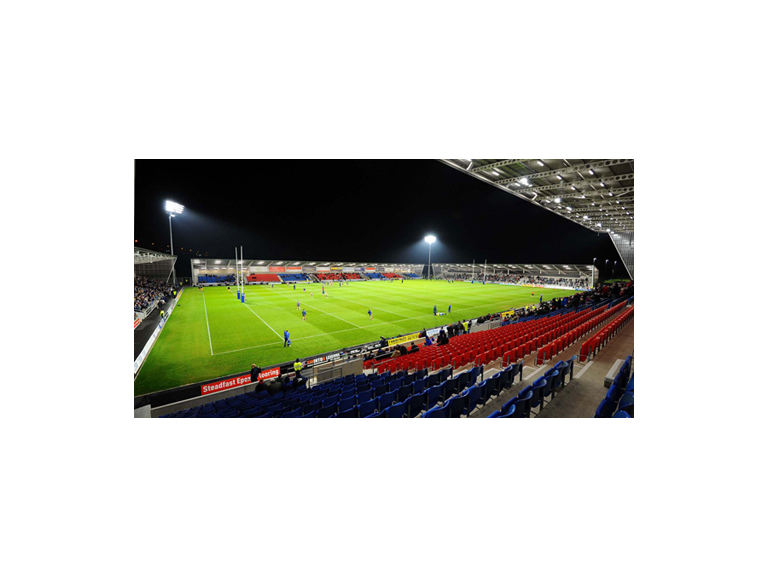 At the end of 2011 and after 111 years, Salford City Reds left their much loved but rather decrepit home ground The Willows, situated in the Weaste area of the city to the much anticipated £26million Salford City Stadium in Barton.

Salford had a turbulent 2011 and 2012 came with the promise off a bright new era for the club. A shirt launch at MediaCityUK unveiled a suprprisingly tasteful green away shirt signalling our desire to perhaps emulate the hugely successful and popular Australian Rugby League team Canberra Raiders who carrier the moniker "The Green Machine".

Salford supporters had cause for optimism as season tickets sales were reportedly higher than ever before. Salford had signed the highly rated Australian centre Joel Moon alongside Rugby League legend Sean Long, who joined the Reds as assistant coach.

The official 1st ever Super League game at The Salford City Stadium was played out live on Sky as The Reds narrowly lost to the Castleford Tigers in weather that could only be described as baltic due to a severe snow blizzard that hit the north west.

Salford's first month of Super League XV was a tough ride; 2 losses were followed by 2 impressive victories against Widnes and Hull FC, the latter coming in the dying minutes of a pulsating home game witnessed by an encouraging 6,000 strong crowd. After 25 matches, Salford have won 8, drawn 1 and lost 16.

Ultimately the first year at our new home has been a mixed affair. The novelty of Playing in a new home has steadily worn off, teething problems have evolved into irritations and supporters have started to vote with their feet and crowds have gradually declined to just under 4,000.

Salford now share the Salford City Stadium with cross code rivals Sale Sharks (Rugby Union), who have moved to The City Of Salford after a lengthy stay at Stockport's Edgely Park. This move is without it's controversity, Union and League have a long history of distain for each other, politically and socially, and only time will tell if the two codes can cohabit under the same roof successfully.

The bottom line is Salford City Reds need the public to turn out and support the club if we are to ever shake of the tag of underdogs and perennial whipping boys. The City of Salford is an energetic, vibrant and fast moving city, a city that is evolving by the day. The City of Salford needs a successful sporting team. With more supporters coming through the turnstiles Salford we will once more be able to sign the best players and rightfully regain our tag as the "Quality Street Gang".

We have a Stadium that's welcoming, comfortable and value for money, add this to the fact that we play the greatest game on the planet, all that is left for me to say is, what are you waiting for?