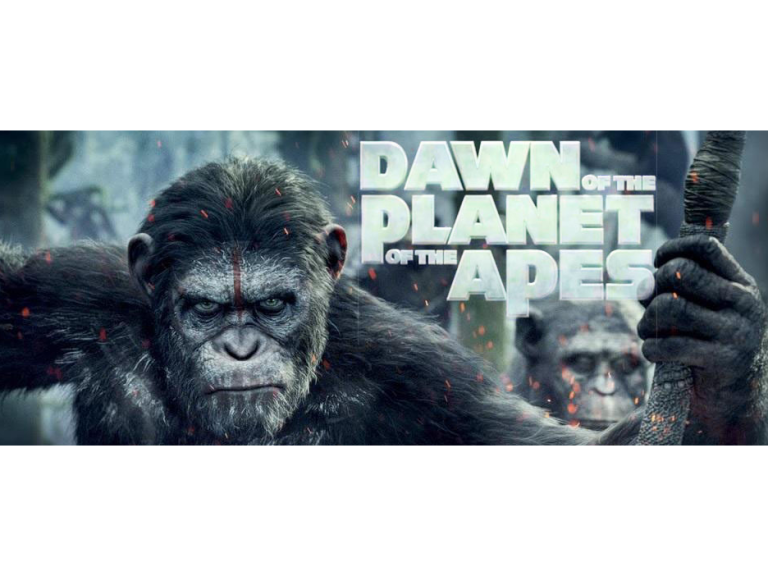 I have mentioned in previous reviews that the summer blockbuster season is rife with sequels, prequels and reboots (with most failing to impress) but with Dawn of the Planet of the Apes, we are faced with a unique film that is actually a sequel to the prequel of the reboot of the original film ‘Planet of the Apes’.

Before I have even sat down with my popcorn, Dawn of the Planet of the Apes ticks every single box that supposedly highlights the tired failings of an unoriginal Hollywood. However, Dawn rises above the usual stagnation that comes with long-winded franchises and follows the lead of the recent reboot to become one of the best movies to come out this year.

8 years after the events of Rise of the Planet of the Apes (the new reboot), we join our favourite intelligent ape (NOT MONKEY!) Caesar as he leads his growing nation of genetically evolved apes in a time of peace and prosperity. That is until the apes come across humans for the first time in 2 years and their peace is threatened as forces on both sides drive everyone to an inevitable showdown.

As far as set ups go it is fairly simple, and is a very similar set up to the 1973 film Battle for the Planet of the Apes so we have seen humans and apes fight each other before but not as spectacularly or even as clear cut as we experience in Dawn. There is no real black and white between the apes and the humans, with both sides having characters that are against war and some that are for war – there is only one character that could be considered a “villain” and I sympathized with him so much that I really hate giving him that label. It makes for fantastic writing and brilliantly complicated characters that constantly keeps you guessing.

Whilst talking about characters, I have to talk about the superb motion capture work in this film that helped bring all the ape characters to life – and these are actual characters that are appropriately fleshed out with their own emotional arcs even if all of them can’t speak. Each ape is given its own unique character traits that help define their personality. You would be forgiven for forgetting that these apes are apes and you aren’t actually watching humans interact with each other – the motion capture and directing is THAT good.

In fact, we spend the first half of the film without an awful lot of action to keep our bored little minds occupied – and it works so well! We care for these characters so much, both human and apes, that we are happy for there to be no action at all for fear that our favourite characters might come to harm. That is a true testament to the great character development in this film.

However when the action inevitably gets going, you won’t want it to stop with the second half of the film being an action spectacular, having some of the best and most memorable fighting scenes in recent memory. Expertly shot by Matt Reeves (Cloverfield), you really can’t tear your eyes away from the screen as great characters and superb action comes together for some of the most emotive scenes to hit the screen this summer.

I can’t express enough how much I enjoyed Dawn of the Planet of the Apes, whether it was watching Andy Serkis do his thing as Caesar or watching Caesar throw down with a bear or even just GARY OLDMAN – I had such a good time watching this film and I guarantee that you will too!

Vue Cinema
Why not check out this Cinema business in Salford. Vue Cinema is a 'thebestof' business member.
Latest Articles