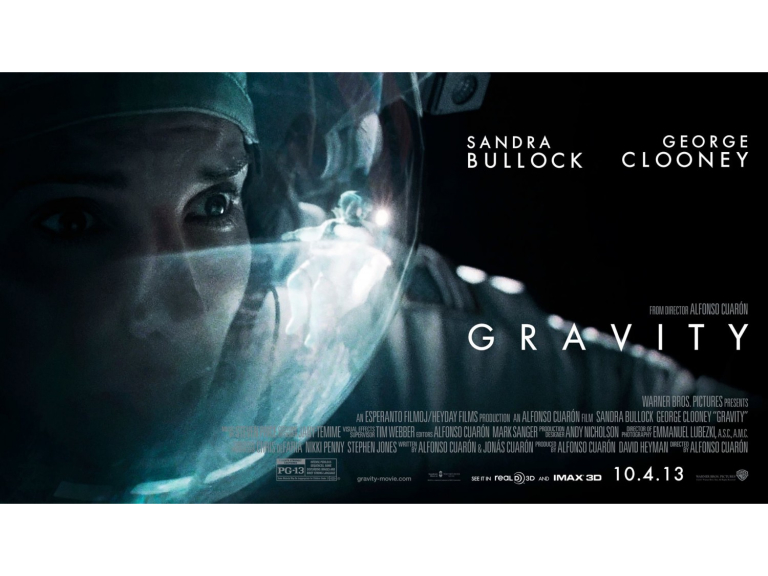 2013 has been another phenomenal year for film, churning out critical darlings such as Rush and Captain Phillips. We definitely haven’t been starved of quality and Gravity is a testament to that fact, easily ranking very high on my favourite film list for this year – my only regret is that IMAX 3D was sold out.

Gravity is the vision of Alfonso Cuaron (Director of Harry Potter: The Prisoner of Azkabhan), and tells the story of a medical engineer and an astronaut working together to survive after an accident leaves them adrift in space. Boasting a tiny cast of two actors, Sandra Bullock and George Clooney, Gravity is certainly a unique high budget film.

The first thing you will notice about Gravity is how stunning and beautiful it is. The story unfolds in space, just above the Earth’s atmosphere, and our blue planet has never looked so good. Cuaron has done a fantastic job of creating an Earth that serves as a constant, looming reminder of character motivations to the audience as well as looking gorgeous to the eye.

With every breathtaking view that Gravity presents to us, there is also a spectacularly stark reminder of the dangers of space. Watching debris rip through space shuttles, as astronauts cling on for dear life, is jaw dropping. Gravity creates more of spectacle with only a few extended set pieces than some action franchises do in three films. At its quietest, Gravity is gorgeous. At its loudest, it is devastatingly wonderful.

And it is within sound that we find one of Gravity’s strongest points. The setting of space opens up a wealth of opportunities for Cuaron to manipulate audiences through audio with the film reminding us at the start, sound can’t travel in space. The sound is utilized expertly to create and build tension, and whether that is through the crackle of a dead radio or Sandra Bullock’s fast, deep breathing as she drifts aimlessly through space – it makes for impressive filmmaking.

What is probably most commendable is that, despite its high budget and glorious set pieces, Gravity is a story with a heavy personal reliance. Cuaron resisted temptation of making a hollow action flick that looks good but lacks heart, like near enough every blockbuster these days, and that is due in no small part to Gravity’s cast.

Sandra Bullock is cast as the lead, portraying medical engineer Ryan Stone, and rises up to the challenge of making the audience care – purely through brilliant acting. We buy into Stone’s fear and pain, taking us on highs and lows (mainly lows) throughout its 90 minute run time. I found myself getting lost in this character as we learn more about a tragic back story and her steely determination as she struggles to survive.

George Clooney takes on the role of astronaut, Matt Kowalski, and although he is charismatic, entertaining and adds some much needed lightheartedness to Gravity, he gives us nothing groundbreaking. This is Clooney playing himself, and you will be accustomed to his style of acting by now, love it or hate it. I’m not a big fan of either Bullock or Clooney but they delivered big performances (especially Bullock) in, probably, the best film of their career.

Gravity also resonated with me on a technological level. Nowadays, in a technologically savvy age, we know (or have an idea) how certain films are made and the process the filmmakers undertook. I have no idea, or even the slightest clue, how Alfonso Cuaron set about making Gravity. Everything from the choice of camera shots, to the setting above Earth, to the editing: Gravity felt unpredictable and very different to anything else out there, carving out its own personality amongst the dullness of modern blockbusters.

I have been handing out these “must-see labels” to a few films this year but please: Get the kids a babysitter, rearrange that meeting and just clear your schedule because Gravity is a truly remarkable achievement of film.