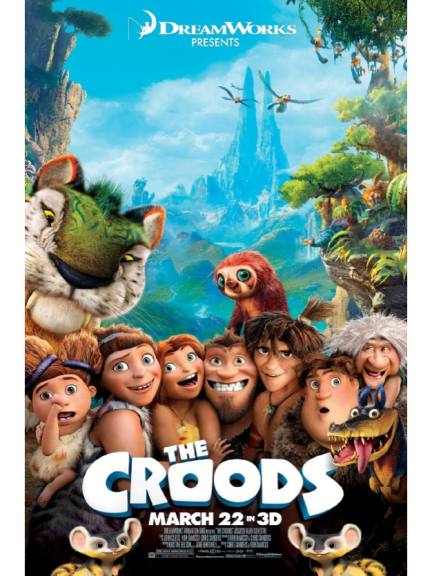 Being a big fan of all past Dreamworks productions, I was excited when I saw their new venture ‘The Croods’ advertised a couple of months ago. As with films like Shrek and Madagascar, Dreamworks are well known for putting a clever adult twist on films which, on the surface, seem like another cartoon aimed at children. With this in mind I can say that this film certainly doesn’t disappoint, and there is humour along the way to suit all ages.

The Croods is based upon a family of the same name, that are living in a primitive pre-historic era labelled the ‘Croodacious’ period (a clever play on words!) Their life mostly consists of hunting for food (there are some hilarious chase scenes between the family and wild animals during the film), and spending time in their cave, much to the dismay of teenage daughter Eep, voiced by Emma Stone (known for Mean Girls and Mamma Mia.)

With protective parents, especially her Father Grug, and annoying siblings, Eep longs to explore the world outside the cave, and find something worth living for. After a near miss with a giant pre-historic wild cat, and a telling off from her Dad, Eep still sneaks off in the night to explore the land beyond the cave. On the way she meets Guy (Ryan Reynolds) who throughout the film becomes an inspirational leader for the family, love interest for Eep, and severe annoyance for Grug, who feels emasculated by Guy’s knowledge and innovative invention skills. While Guy is not from the future, he shows the family that there is life outside the cave, and that their primitive existence is holding them back from truly living.

After amazing the family by showing them how to make fire, Guy informs them that he is setting out on a journey to a pair of mountains which can be seen on the horizon. The reason for this is that the land as they know it (and the Crood’s cave) would soon be lost to severe earthquakes and volcanic eruptions. After these predictions from Guy begin to occur, both him and the family make a narrow escape into a new exotic land that lies just beyond the dusty, baron cliff faces that have been the Crood’s home for so long. Here they encounter many strange new creatures and landscapes, some dangerous (swarms of birds that could devour you in seconds), some adorable (a miniature mouse with an elephants face), and some hilarious (giant land whales).

While this adventure through new and daunting environments is exciting for Eep (as she grows ever closer with Guy), Grug feels increasingly uneasy about his lack of control over the situation, and inability to protect his family. As the film goes on, he realises that in order to become a better person, he must learn from Guy, and embrace the family’s new life outside the cave.

There are so many great moments throughout this film, some heart stopping and some heart warming, as the Croods grow closer and stronger as a family, and Eep finally finds the freedom and life she has yearned for for so long. With a combination of pre-historic puns and cute Croodacious critters, this film is a certainly a great watch for all the family, and for those (like me) that just love a good cartoon!