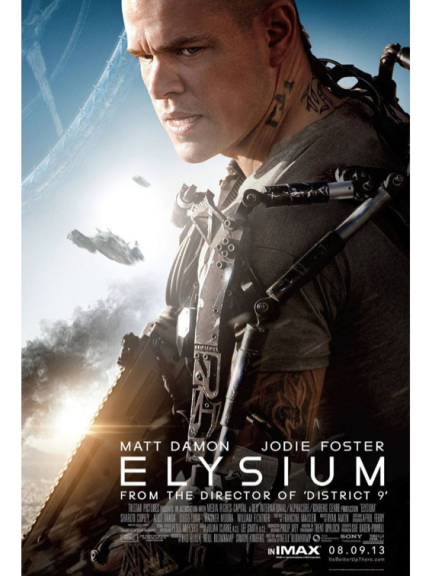 When District 9 was released, in 2009, it was a hit with the audiences as well as the critics and as directorial debuts go – you won't find many better. It was a refreshing and unique take on the alien sci-fi genre that also tackled some pretty big socio-economic problems that are a lot more real than we like to believe. Everything clicked and everything worked. Can Neill Blomkamp mirror his first success with his second film: Elysium.

Elysium is set in the year of 2154, where the wealthy built a space station, called Elysium, to escape the detiorating and over-populated Earth. Max (Matt Damon) takes on a mission that could bring a sense of equality to these two vastly different ways of life. From the onset, this universe I fully realised and beautiful to look at – Elysium looks picturesque and beautiful with big suburban houses layering the artificial grass of the space station, everything looks futuristic and clean. Whilst Elysium prospers, Earth is portrayed as dirty and crowded with robot policemen just about keeping the order, as sickness and crime runs rampant.

These polarising worlds are Elysium's greatest strength and Neill Blomkamp looks to have an eye for creating atmosphere and film universes. However, the characters that populate these worlds aren't as strong. We are first introduced to Max, an ex-con who is just trying to get by, but as a lead character he just isn't likeable – but that is the point (should probably be referred to as an Anti-Hero). Max's character is very similar to Sharlto Copley's character in District 9 and without spoiling anything; their character journeys are near identical. As a writer and director, Blomkamp isn't showing much range with his leads.

However, Sharlto Copley's character in this film is a highlight. Introducing Kruger, an agent of Elysium based on earth, and it is through him we get our best moments of the film. Copley's performance is as funny as it is sinister, leading to some memorable moments that will make you laugh as much as it scares you. Possibly the blockbuster performance of the summer. The weakest character by far, is Jodie Foster's character, Delacourt, Elysium's secretary of defense who simply can't do a French accent as well as having the most poorly fleshed out motives in the film, which become more suspect at the end of the film.

The action is as great as it was in District 9, with the firefights and exo-skeleton fist fights being a plenty and very well shot. Blomkamp made a very clever decision to slow down some of the action, which highlights the true power and magnitude of the guns and the explosions – making for some satisfying spine-tingling set pieces. In spite of this, I felt that Elysium squandered a lot of its potential and one of the coolest aspects of the film, the robots, were only used as a plot point with only one (very cool) action sequence.

It wouldn't be a Blomkamp film without exploring political and sociological themes and Elysium is not an exception with immigration, healthcare and class issues being utilised. A lot of comparisons could be drawn between the films immigration issues and the immigration issues that America is facing from Latin America and Elysium does a fantastic job of highlighting these contemporary issues in an entertaining and informing science fiction film.

Although it doesn't reach the dizzying heights set by District 9, and shares a lot more similarities with that film than it should (The leads from each film are essentially the same character), it stands as a good film in its own right and has more intelligence than a great deal of movies released this summer.