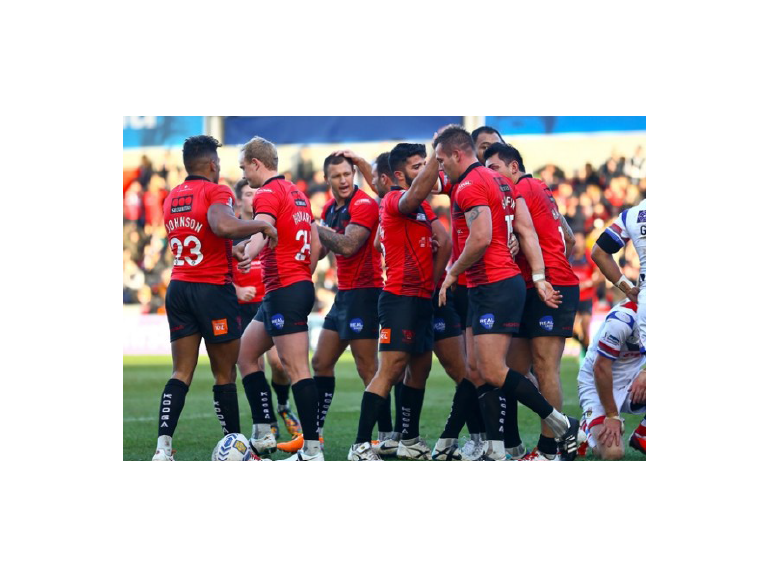 Salford welcome Warrington Wolves to The AJ Bell Stadium this Friday and it's going to be another tough test for a Salford side that has been decimated by injuries. Junior S'au once more had to leave the field with a shoulder injury sustained during Salford's defeat at The Halton Stadium as the Red Devils were handed their second consecutive defeat at Widnes last Thursday.

Despite leading by four points at the break (8–12), it was due to some disappointing individual defensive errors and bewildering refereeing decisions that resulted in The Vikings pillaging the Reds defensive line, scoring three tries in the final quarter to seal the two points (32–18).

Salford will once more bemoan their luck with the bounce of the ball, despite a stellar showing from French international Theo Fages, and a stunning individual effort from former Batley Bulldogs winger, Greg Johnson - who picked up the ball in his own half, galloped out of two tackles then side stepped Widnes' full back, Rhys Hanbury - for what will surely be a contender for 'Try of the Month', if not the season.

Former Parramatta player, Jake Mullaney, again showed his class, with quick feet and great awareness sending Theo Fages over the whitewash. Salford should have had the match in the bag, but once more key areas of the team were not completely switched on and the frustration began to show as Tim Smith made several errors with ball in hand. Hooker, Tommy Lee, was once more impressive in the hooker role and questions were asked of Brian Noble's game plan by Salford supporters when Lee was replaced by the out-of-form, Stuart Howarth.

There is no doubting the danger that Warrington pose. The key man for The Wolves is former long serving Salford favourite, Stefan Ratchford, who departed The Willows at the end of the 2011 season after joining Salford as a young apprentice in 2006. Ratchford was very much a utility player during his time at The Willows - often playing fullback under Shaun McRae - but due to his natural attacking flair and footballing brain, Wolves coach Tony Smith has shown faith and Ratchford has settled into his preferred position of stand off, finally nailing the number seven jersey after the retirement of Warrington legend, Lee Briers, at the end of last season.

Salford will be without long term casualties, Rangi Chase and Gareth Hock, whilst Shannon McPherson, Francis Meli and Darrell Griffin all continue to struggle with short term injuries. Former New Zealand Warriors loose forward, Steve Rapira, was dealt a blow this week when he was handed a one-match ban for a dangerous tackle committed during the Widnes defeat. Rapira issued an early guilty plea and will be disappointed to sit out another match.

The loss of the above key players has forced Brian Noble to bring in an extra body, snapping up the young Wigan Warriors winger, Dominic Manfredi, on a months loan.

Off the field headlines were once more focused on Red Devils owner, Dr Marwan Koukash, this week as he was handed a £1,000 fine by the RFL for comments made at The Red Devils' media launch held at The Lowry Theatre on February 4th.

Koukash, who on the day launched a blistering and colourful attack on The Rugby Football League in reference to his dismay at how much the administrators of the sport are being paid as opposed to how little the players of the sport are paid.

Koukash was charged with breaching operational rule D1.8 (c): 'Engaging in conduct which is prejudicial to the interests of the game'. Despite having 14 days to appeal against this ruling, Koukash took to Twitter to express his bewilderment: 'Can anyone tell me what was wrong with my comments? I did not receive a single complaint from the 300 people who were there for speaking my mind, why bring it up now?'

Meanwhile, Koukash this week informed his 11.4K followers that former Saints legend, Sean Long, has rejoined The Red Devils' coaching team. Long who recently disclosed his battle with depressive illness, left Salford last April to take up a position at his home town club, Wigan Warriors. Long soon left Wigan to join Featherstone Rovers as Football Manager before being handed a role on the coaching staff of the beliguered London Broncos in December. Due to London changing the terms of his contract to only one day a week, Long and London parted company at the start of the month.

Long took to Twitter to express his delight at rejoining Salford firstly thanking Dr Koukash: 'I would like to thank you for the opportunity to be part of your coaching staff and the Devilution. Can't wait to get started', following it up with the message, 'Great to be back at Salford. Massive game for us Friday night against Warrington. Can't Wait!!!'

So will the return of Long see The Red Devils skin the Wolves? There's only one way to find out - be there this Friday 14th March at the AJ Bell Stadium, KO 8pm.

Tickets available from www.thereddevils.net or the stadium reception.