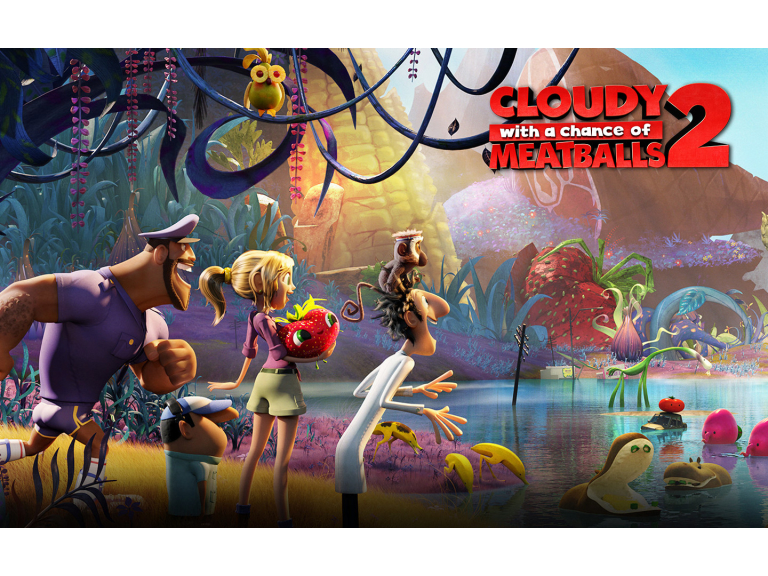 Disney and Pixar have dominated the animated film industry for many years now, with DreamWorks managing to upset for a few years with the brilliant “Shrek”. Taking this into account, you would be forgiven for thinking that any other Animation Company could hold down any sort of place in the charts. Sony Pictures Animation hope to change that by building their smash-hit “Cloudy with a Chance of Meatballs” into a franchise.

So, Cloudy with a Chance of Meatballs 2 has a big job on its hands – having to differentiate itself from Pixar as well as standing on its own two feet and being a genuinely entertaining film in the process. While Cloudy never reaches the quality of our beloved Pixar movies, it stands out as a funny, entertaining experience for all the family.

From a technical stand point; Cloudy with a Chance of Meatballs 2 is astonishing. The world that the animators have created is beautiful and vibrant, especially the Swallow Falls. Jungle overrunning urban areas has been over-done in recent years, through video-games and television, but it has never looked so gorgeous and attractive.

The world is gorgeous but don’t go into the film expecting the realistic style of Pixar films, Cloudy with a Chance of Meatballs 2 has its own cartoony style that works very well, in terms of the tone and narrative of the film. This is a film that prefers to tickle your funny bone rather than your tear ducts.

If Cloudy with a Chance of Meatballs 2 has set out to make a genuinely funny film, then it has passed with flying colours! Cloudy isn’t mainstream funny, it doesn’t shove jokes down your throat and expect you to laugh every second, instead choosing for that alternative style of comedy that is becoming ever more popular. The film relies on word play and puns for most of its jokes, with the rest being assigned to slapstick comedy from the Foodimals – Adults and children will be entertained alike and I couldn’t stop myself from bursting out laughing on a few occasions.

You can’t have a good comedy, animated or live-action, without a colourful cast of characters that you know and care about – Cloudy with a Chance of Meatballs 2 succeeds again in this respect. Our gang of heroes each has their own hilarious moments and are well fleshed out but a special mention needs to go to Terry Crews (Earl Devereaux), who steals every scene he is in with each of his lines being delivered with side-splitting satisfaction.

It’s a shame that the film’s villain can’t quite keep up. Cloudy with a Chance of Meatball 2 has carved itself a unique position in animated film so I was disappointed to see that the film fell back on generic story telling with a Villain that got tiresome and annoying very quickly. Primarily, it is a kid’s film but I expected something a bit different however it didn’t detract from the enjoyment of the film.

Truth be told, Cloudy with a Chance of Meatballs 2 was at its very best when it left behind the story to explore its weird and wonderful world. Discovering all the species of Foodimals combined with the random nature of Cloudy’s comedy resulted in some fascinating results of hilarious proportions.

If you have a child, you have an excuse to go see this film. I had such a good time in the cinema, with a lot of laughs to be had – children will enjoy the Foodimals, characters and general silliness of Cloudy with a Chance of Meatballs 2 whereas Adults will enjoy the alternative nature of the film. I can’t wait to see more from this franchise.