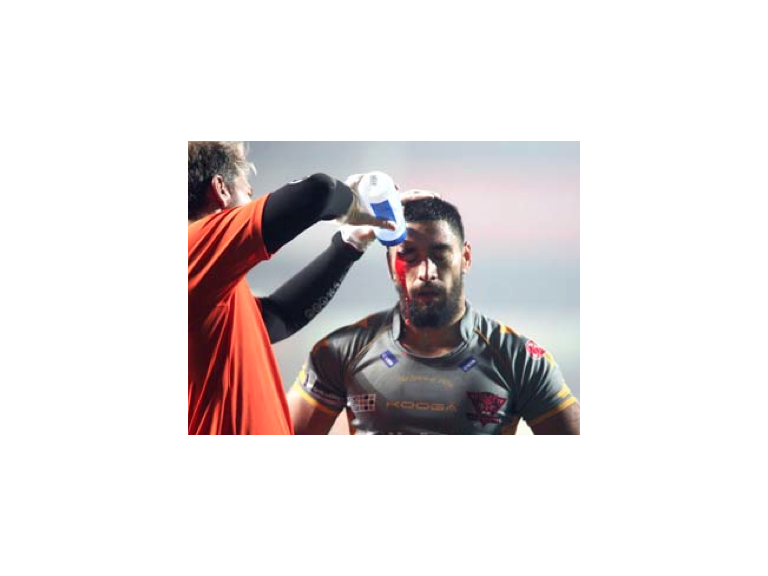 Salford began the match as underdogs after the Black and Whites dished out a 30–8 beating at the same venue only 6 days earlier, but shocked the crowd as they beat Hull FC to enter the next round of The Challenge Cup.

Gareth Hock returned to Salford after missing the last 5 fixtures with ankle damage, expelling any doubts about his hunger to gain success with the Devils.

Salford’s defence was again frail, conceding far too many points whilst individual errors continued to undo an impressive attacking structure.

Rangi Chase was the man of the moment as he scored a cheeky try after throwing several dummies which left the FC defence wondering what had just happened as the half back scampered over the whitewash.

Theo Fages, Salford’s French international, produced another fine display, touching down for his 5th try of the season. Ex-Saints wingman Francis Meli produced a mixed performance, his 3rd try of the night giving him a hat trick that made amends for conceding some woeful tries.

The pressure was now on, and with the small contingent of Salford supporters finally being able to have a little dream of Wembley, the match was tied with only 66 seconds on the clock. Star centre Junior S a’u finished off a Chase break to leave Mullaney with the task of kicking from the far touchline. Mullaney who finished the evening with 6/6 silenced the home crowd with a stunning last touchline conversion which forced the contest into extra time and golden point territory.

With the first score deciding the winner, it was Salford that held their nerve suffocating the Hull Defence. The resulting handover allowing Chase time and space to slot a drop goal between the posts taking Salford into the 5th round of the cup with just 2 minutes of the added 10 minute period remaining.

After such a stunning victory many would have thought Devils' owner Dr Marwan Koukash would have been bestowing head coach Brian Noble with praise and adulation. Instead, in customary style and only 24 hours after the greatest Salford victory of recent times, The Good Doctor dropped a bombshell via his Twitter account announcing that Brian Noble was to be replaced as head coach by former Leeds and Bradford player Iestyn Harris. Commenting that he would like Brian Noble to take up the position of Director of Football.

Noble being the model professional he is, continued with his media obligations appearing on this weeks' televised Rugby League matches and, despite being humiliated, has remained dignified and restrained, only commenting that he is currently seeking legal advice, whilst wishing his successor the best of luck.

And boy, will Iestyn Harris need some luck! The former Welsh International has little head coach experience and was of course assistant coach to Brian Noble whilst at the Crusaders and more recently, head coach of the Wales International side that participated in last years' World Cup tournament.

Oldham-born Harris has been assistant coach to Shaun Wane at double Champions Wigan Warriors for the past couple of seasons and is set to be unveiled at a press conference today, whilst his first game in charge of The Red Devils will be away to the Bradford Bulls at Odsal Stadium this Friday night.