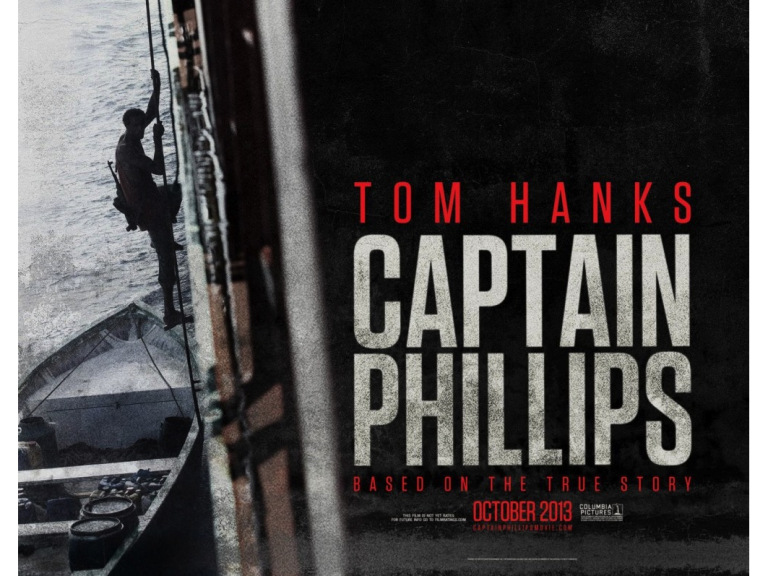 What is it with biopic films recently? From Rush to The Fifth Estate, biopics seem to be in fashion at the moment and I have absolutely no complaints if we get films like Captain Phillips with each attempt. It is a phenomenal combination of filmmaking and acting.

Captain Phillips is the true story of Captain Richard Phillips and the 2009 hijacking of the US-flagged MV Maersk Alabama by Somalian Pirates – the first hijacking of a US ship in over 200 years. As biopics go, you don’t get much better source material than that! As with the biopics I have reviewed in the past, I don’t take factual accuracy into account – just filmmaking!

To kick proceedings off, I want to bring your attention to the acting in Captain Phillips, Tom Hanks’ acting to be more specific. Hanks presents us with a believable hero in Richard Phillips who exhibits both strong and vulnerable moments over your 2 hour viewing. For me, this is another example of how Tom Hanks is one of the best actors to ever live, showing a heck of a lot more range than Robert De Niro or Al Pacino.

Tom Hanks manages to successfully deliver a performance that lets the audience buy into Captain Phillip’s challenge and adversities, which in turn makes the final 20 minutes much harder to watch – in a good way. Hanks is mesmerising, magnetising and at his absolute best. I feel an Oscar Nomination coming his way.

If Tom Hanks is the heart and soul of the film, then Paul Greengrass' (Bourne Supremacy/Ultimatum) direction is the driving force behind Captain Phillips. From the moment that Phillips steps onto the cargo ship, my heart was in my throat – and it only got better from there. Both the antagonists and protagonists are in such dire situations that you can’t help but stare in awe at filmmaking at its best.

That being said, I have a slight problem with Paul Greengrass’ overall style, that is not only prevalent in Captain Phillips but both his Bourne films. The director has an inclination to use the shaky cam technique that is supposed to evoke a sense of urgency and excitement that, in my opinion, just falls flat on its face.

At certain points the shaky cam was unwatchable, forcing me to concentrate too hard on working out what was actually going on. However, this is only a (begrudging) small gripe and in no way impeaches on a sensational film.

I have touched on the antagonists ever so slightly, but a special mention needs to go to the main villain (if that even is the correct label). The Somalian pirate, Muse, is a layered and multi-dimensional character that we both sympathise with and condemn at the same time.

When you consider that it is a newcomer to film, Barkhad Abdi, that plays Muse; he does a marvelous job of presenting the complexity of the character. It would have been so easy to pit Phillips against an un-relatable, evil pirate but I am impressed by the bold decision to create him as a complicated villain. This complexity applies to most of the pirates involved, and is a refreshing perspective for the thriller genre.

Despite my love of film, it is extremely rare for a film to grip me for 2 hours straight and keep me on the edge of my seat. Captain Phillips manages to achieve this because of a combination of Tom Hanks’ powerhouse performance and Paul Greengrass’ expert building of tension.

I left the cinema an emotional mess and not being able to stop shaking. I am so excited and thrilled to be able to fully recommend Captain Phillips. A must see!