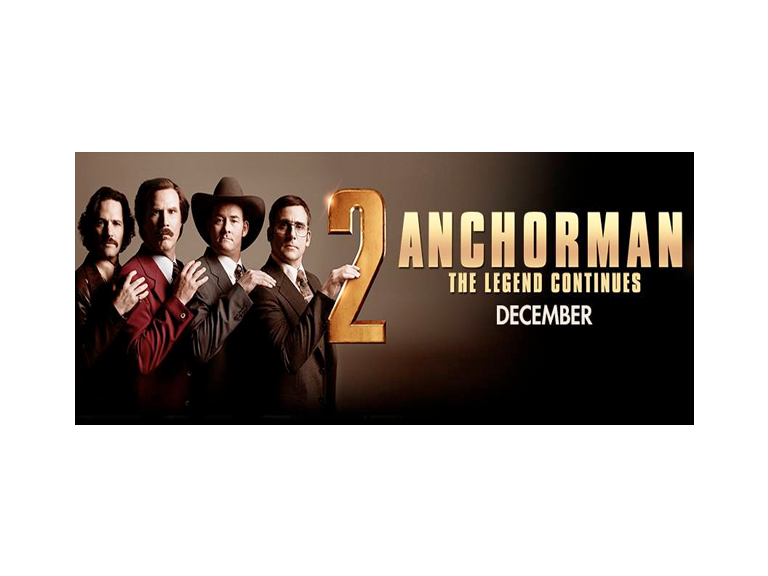 The comedic duo of Will Ferrell and Adam McKay has produced a string of consistently funny films that are spilling with quotable line after quotable line, but Anchorman 2 is new territory for this talented partnership as they take on their first direct sequel.

The first Anchorman film is a staple in my comedic viewing, or to put it a simpler way, that was one darn hilarious film. It introduced me to the wonderful world of Will Ferrell and his unforgettable portrayals of various sidesplitting characters that spanned such films as Talladega Nights and The Other Guys.

Anchorman has garnered a very loyal fan base since its release back in 2004, so its sequel certainly has its work cut out for it. Could Anchorman 2 possibly be as funny as the original? Will it inspire me to re-watch over 100 times to the point I can quote the whole film word for word? If you hadn’t got it so far, I really liked Anchorman.

Anchorman 2 picks up after Ron Burgundy’s (Will Ferrell) success in the 1970s as he returns to take New York’s first 24-hour News Channel by storm. In all honesty, does the story really matter? All it needs to do is throw up situations where we see Ron Burgundy at his egotistical best as well as give us fantastically ridiculous scenes with his news team! Anchorman, like any good comedy, is about its characters.

And Anchorman 2 has the advantage of already having a film universe established with a cast of hilarious and lovable characters, from Ron himself to the slow-witted Brick Tamlen (Steve Carrell) – all the sequel needs to do is give us more of what makes us laugh as well as introducing new characters to keep the comedy as fresh as possible.

In this respect, Anchorman 2 is successful. We get a lot of what we all loved from the first film, which means more Ron Burgundy cursing (By the beard of Zeus!), more Brick one-liners (I love lamp) and even more surreal situations for the news team to fight their way out of (Another news team battle anyone?). Not only that but Anchorman 2 adds enough new blood to the cast that we see the gang get in more unique situations like Brick falling in love with the always funny Kirsten Wiig.

But fret not, despite the introduction of new characters, we spend a massive bulk of our viewing time with our favourite gang of newsreader misfits – especially the main man himself and Will Ferrell is sublime as usual in one of his most loved roles to date. Ron Burgundy steals every scene he is in, it doesn’t matter how he plays it, you are magnetised to Ron’s articulate screaming just as much as his one liners.

The rest of the News Team is strong, with Brick getting significantly more screen time than Champ and Brian. He was a fan favourite from the original, so it made sense he was given more of the spotlight and as enjoyable as his scenes with Kirsten Wiig are, I do feel that sometimes less is more. Brick started to become predictable the more we saw of him, losing the magic of the character.

My main complaint about Anchorman 2 is that is pales in comparison to its much funnier predecessor. Yeah, the sequel is funny and had me chuckling for most of its 2 hour run time but there were only one or two moments that had me truly laughing out loud – Ron sitting down for dinner with a black middle class family is the best scene in the whole film. The original had me laughing out loud every few minutes that makes me think there was something missing in this enjoyable sequel.

Anchorman 2 is a funny film, and another unmissable opportunity to see Will Ferrell don the famous moustache, but it lacks the magic that made Anchorman such a overwhelmingly hilarious film.