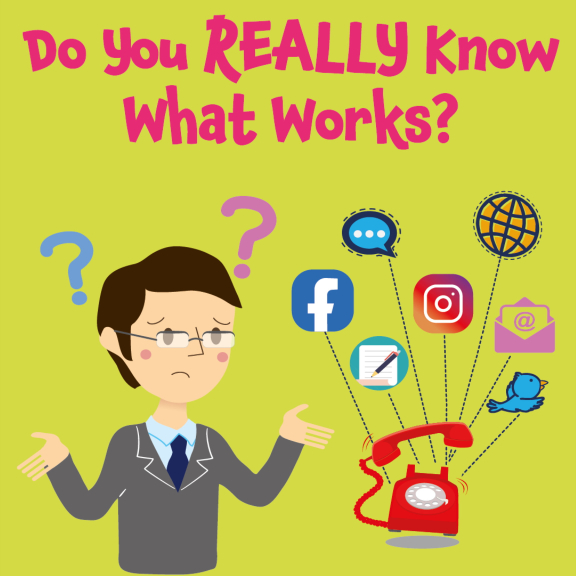 It used to be a well-worn saying, adapted from department store magnate John Wanamaker, - “Half my advertising works and half doesn’t, but I just don’t know which is which”.
And in the 1920’s, when this quote was first used, it was valid.  But times have moved on and it’s now a phrase that can only be used by lazy, ignorant business owners.
It’s so easy now-a-days to get a pretty good handle on most of our advertising with a little tool called Tracking Numbers...
Tracking Numbers are simply a telephone call tracking services that allows you to track and monitor how many calls you receive from each individual piece of marketing that you do.
It works really simply:
You acquire a set of new, different phone numbers, assign each one to a different marketing piece - and you point them all at your existing phone line. It’s really easy to do.
Don’t panic. YOU DON’T HAVE TO CHANGE YOUR PHONE LINE, OR YOUR PHONE PROVIDER AND YOUR EXISTING NUMBER STILL WORKS AS WELL.
Everything stays the same. Your existing phone rings in just the same way. You answer it in the same way. The only difference is that now you know which advert or piece of marketing generated each call - because you can go online and see, instantly, at any time of day or night, how many calls you’ve received on which numbers.
Let me give you an example. Let’s say I have a flyer, I also have ads in three other local magazines, I have a website that I drive traffic to via Facebook Ads, I have a brochure and also business cards that I hand out at networking events.
That’s 7 separate pieces of marketing:
With Tracking Numbers, I’ll buy 7 separate phone numbers - all local STD numbers and I’ll allocate one phone number to each stream of marketing. Then I’ll know for sure, over time, exactly which bits of marketing are working best for me.
I’ll keep my existing number as well, so any existing customers can still call me on that and all these new numbers will ring on my same existing phone line (I don’t have seven phones!).
Simples!
Seriously, it works like a dream - and it’s one of the most under-used tools available to businesses in the UK.
Poor media players are frightened to death of tracking numbers. The last thing a magazine wants is their advertisers being able to track precisely how many calls their ad generated. That would make them accountable and they don’t want that - which is one of the reasons why so few businesses know about Tracking Numbers.
But you know about them now - and I urge you to use them in your business.
Oh, when you log on to check your stats it will also tell you how many calls you failed to answer. Imagine that. You’ve placed an ad, a potential customer has seen it, called you up...but no-one picked up the phone. You’ll know exactly how many calls you (or your team) aren’t answering.
That’s powerful stuff and you can have all that info at your fingertips 24/7 which is really useful if you’re serious about growing your business this year and beyond.
Give us a call if you’d like to know how to get this working in your business.

If you want to get Business Tips like this one all you need to do is add your name and email address at eepurl.com/dmybYP
More