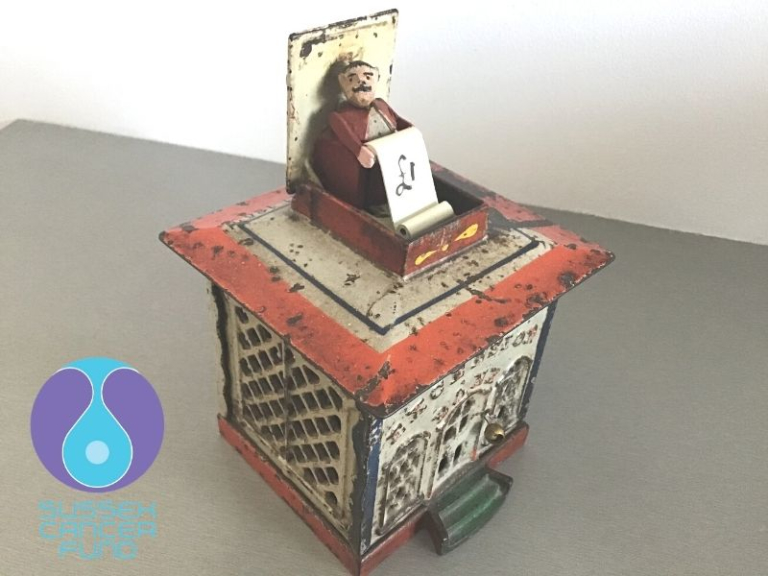 The Sussex Cancer Fund is delighted to have received a donation from Alan and Maggie Spencer and their friends for £100. However, the donation itself has a wonderful story. The money was collected in a vintage money box full of family history that has been expertly restored by Steve Fletcher on the BBC’s popular TV programme ‘The Repair Shop‘.

The money box was Alan’s Great Uncle Pat’s and is one of the oldest mechanical money boxes, with an American patent published on December 21st 1860.

Alan Spencer said “I remember my great uncle Pat, having this when I was about 10 years old. Some 60 odd years ago. He was always intrigued as to how things worked, so took things to bits, and rarely put them back together. Hence my appearance on the Repair Shop.

My great uncle Pat was a real eccentric character, who cycled all over Europe just before the 2nd world war, he used to entertain people with his paper tearing act, and even appeared on the radio doing his act. How anyone could be entertained via the radio doing this is beyond belief.

On the Repair Shop, I asked Steve not to repaint the box, as I thought it showed a lot of history. The only alteration I asked for, was that it could take £1 coins, so that any visitors could donate, via the money box to you (The Sussex Cancer Fund).”

Once the money box was restored, visiting family and friends would pop a coin into the box to raise money for the Sussex Cancer Fund. Alan commented, “We as a family have suffered the pain of cancer, but also the joy that our son-in-law has now been given the all-clear, from Hodgkins Lymphoma.”

You can see the episode of The Repair Shop Here (watch from 12mins 25 seconds).

We would like to say a huge thank you to Alan & Maggie for your support and for sharing this wonderful family story.